The world still shakes after the Knesset elections of 2015. Netanyahu not only won, but won handily. Sadly, the United States government doesn’t appreciate that. Neither do most of the Western media organs. They make much of something Netanyahu said in the last days before voting. But not what he said. What they thought he said. Or maybe what they told the world he said. Did they know better than that?

What everyone thought he said

Netanyahu held a rally over the last weekend. He said something about a “Palestinian” state. The American and other governments have talked about such a state at least since Black September. (That’s when King Hussein of Jordan kicked the Palestinians out of his kingdom. They tried to overthrow him. He expelled them. End of story.)

Haaretz, the Israeli counterpart to The Washington Post, carried this piece by Barak Ravid. He began thus:

Prime Minister Benjamin Netanyahu said Monday that if he were to be reelected, a Palestinian state would not be created, in a definite disavowal of his 2009 speech, in which he had voiced support for the principle of two states for two peoples.

Haaretz went on to say where Netanyahu made his remarks. Ravid mentioned the site NRG, and its owner, Sheldon Adelson. Ravid mentioned Adelson’s other business interests: casinos. He probably meant to make more about this: NRG has a tie to another paper, Makor Rishon. Ravid called that a “settler paper.”

He accused Netanyahu of trying to capture votes from another party, the Jewish Home party. Then he gave this quote:

I think that anyone who moves to establish a Palestinian state and evacuate territory gives territory away to radical Islamist attacks against Israel…The left has buried its head in the sand time and after time and ignores this, but we are realistic and understand.

That much, Haaretz quoted Netanyahu as saying.

But they left out at least one key word: the Hebrew word hayom. Translation: today.

This link goes to the interview in NRG. This one goes to a piece in Breitbart News. That piece has a full transcript of the interview, in English. Ha’aretz left out the context. Breitbart restored it:

I think anyone who is going to build a Palestinian state today will be freeing up space to give an attack area to radical Islam against Israel. This is the reality created here in recent years. Anyone who ignores this sticks his head in the sand. The left does this, burying its head in the sand again and again. We are realistic and understand…

If you doubt this, play the embedded video.

The difference means much more than his opponents want to admit. He has tried offering everything within reason, and other things not within reason, to induce the “Palestinian Authority” to meet him halfway. They will not. Recall who controls Gaza: the Islamic Resistance Movement. The world knows it by its transliterated acronym, HAMAS. They derive from the Muslim Brotherhood. And they still shoot off rockets at Sderot, at last report.

Notice the concerns Netanyahu raised. “You’ll be clearing the way for a staging area for radical Islam. Those are the facts. And those facts came about in recent years.” He wants that context to change.

But Haaretz shaded what Netanyahu said, and dropped the context completely. That sufficed to turn what he said inside out.

All the other media organs ran with that. Obama ran with that. To be fair, Ted Belman at Israpundit ran with it, too. He gave a loud cheer. But Barack Obama called Netanyahu to “congratulate” him on winning re-election. Then he threatened him with U.N. Security Council action. 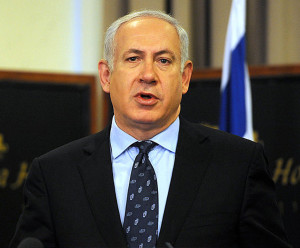 To be specific, the Security Council will take up a resolution to demand that Israel surrender every square millimeter of territory she gained in the Six-day War. Usually the United States Ambassador would veto any such resolution. But, Obama clearly hinted, not this time.

Let’s remember a few things. The 1967 borders have no legal force. That expression refers to an armistice line dating from 1949. The armistice document clearly said that line existed for convenience only.

The legal facts have changed since then. Egypt signed a treaty in 1973 drawing a line between the Sinai and the Negev. Jordan signed another in 1996. That treaty draws the territorial boundary of Jordan east of the Jordan River. In short, Jordan renounces all claim to the land it held at the end of the War for Independence. The international community calls this “The West Bank.” Residents of Israel call this by its proper name: Judea and Samaria.

Two years ago, the Levy commission made a clear finding: Israel does not “occupy” any territory. Judea and Samaria belong to it. So far, Netanyahu hasn’t accepted it officially. Maybe he should.

And one more thing. Oddly enough, Haaretz published this piece by Moshe Arens, nearly two months ago. It carried this subheading:

The reason prospects of an Israeli-Palestinian peace agreement are hardly discussed ahead of the election is that the vast majority of Israelis don’t believe in them at all.

Associated Press: a legacy of propaganda