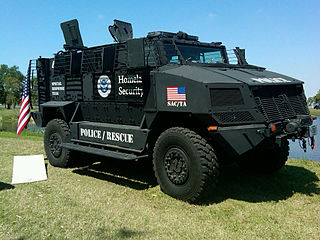 Lo and behold, today de facto President Barack H. Obama sharply curtailed one of the government’s most fearsome programs: the 1033 program. Now he has an epiphany! Militarized police, he now feels, go too far. Don’t give him too much credit. He knows generalized martial law won’t fly. Militarized police departments won’t serve him now. But he has certainly backed off. He just made martial law less likely.

The Associated Press carried the news and has the best detail. (Brianna Ehley at Yahoo!News has more.) Section 1033 of the National Defense Authorization Act of 1997 set the program up. Under it, State and local police departments and sheriff’s offices can buy sophisticated equipment the Army and other services no longer need. (Justnet.org had a page on the 1033 program but seem to have taken it down.) The Defense Logistics Agency has further details on how the 1033 program works and how State and local law-enforcement agencies can apply for such military surplus property. 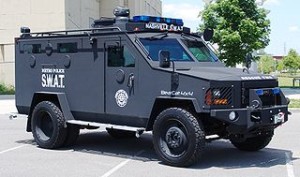 Needless to say, this kind of merchandise goes far beyond the tents, ammo belts, canteens, mess kits, and other camping gear one can buy as “Army/Navy surplus stores.” Section 1033 has some of that kind of equipment. But it also disposes of armored vehicles and even heavy weapons.

Or it did until today. According to the AP, Obama said today the Section 1033 office would no longer give away things like tracked vehicles (like “halftracks” or even tanks). In fact:

Now, the White House is placing a ban on the transfer of some surplus military equipment including grenade launchers, armored vehicles, aircraft, bayonets, and certain kinds of guns and ammo. The president’s actions would not require police departments currently possessing that equipment to be returned. It just bans the transfer of that equipment going forward.

The government will still give away a few other things under Section 1033. But it will have to follow a new set of rules. Among other things, the federals will not give away any such equipment unless the local government authority approves first. And any officers who get such equipment, will need training on how to, when to, and when not to.

The Rutherford Institute took heart today with this news of the slowing-down of militarized police. Still, John Whitehead, its head, worries.

Unfortunately, we’re so far gone now that stopping the flow of military equipment to local police will not stop militarized police from acting like soldiers on a battlefield, which is how they have been trained to act. Therein lies the greater problem.

But the Baltimore Incident this year must have showed Obama something else. He certainly sounded as if he expected race riots to break out after Freddie Gray died. They did break out in Baltimore itself, and New York, and Chicago. They did not break out in Middle America. In fact, the country did not see riots breaking out in all those cities at once, either. No thanks to Obama. That gave Obama no excuse to declare martial law. And it is even less likely to break out in Middle America than in those few enclaves where his loyalists live.

Not only that, but too many local sheriffs and police chiefs have said flatly: they will not co-operate if this President, or any President, declares martial law. So if Obama hoped he could place military assets, then commandeer them, he just learned differently. Suddenly, placing these military assets in the hands of local police chiefs and sheriffs, no longer seems advantageous or even safe for him. So today, he curtailed the 1033 program. This, nine months after defending that same program to the hilt.

Obama’s leftist friends gave loud cheers when he said that today. But John Whitehead has greater reason to cheer – and to keep worrying.