In his 2002 foreword to Raphael Patai’s 1973 classic, The Arab Mind, Norvelle  B. de Atkine writes: “This book … forms the basis of my cultural instruction, complemented by my own experiences of some 25 years living in, studying or teaching about the Middle East.”

De Atkine notes that “officers returning from the Arab world describe the cultural barriers they encounter as by far the most difficult to navigate, far beyond those of political perceptions.  Thinking back on it, I recall many occasions on which I was perplexed by actions or behavior on the part of my Arab hosts—actions and behavior that would have been perfectly understandable had I read The Arab Mind.” 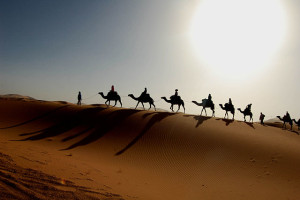 Caravan offering rides to tourists in Morocco’s part of the Sahara. Credit: User Bachmont on Flickr, CC BY 2.0 Generic License

To speak of Arabs is to speak of Muslims, for Arab culture is permeated by Islam. Islamic hatred of America and of Israel is more intense and more widespread today than it was in 1973. American pop culture and commercial imperialism constitute a threat to the Arab’s tradition-based society, and Muslims see Israel as America’s vanguard in the Middle East.

Patai, says de Atkine, does not deny the virtues of Arab culture. “The hospitality, generosity, and depth of personal friendships common within the Arab world are rarely encountered in our more frenetic society.  The Arab sense of honor and of obligation to the family—especially to the family’s old and young members—can be contrasted to the frequently dysfunctional family life found in our own society…”

But such is the burning hatred Arabs bear toward Jews that many willingly used their own children as human bombs, while the Arab street cheers such barbarism. Hatred trumps love.  Arab hatred was not born with the Balfour Declaration or the establishment of the State of Israel. It precedes Muhammad and remains deeply engrained in Arab culture.

Patai quotes Ibn Khaldun (1332-1406), the greatest historian ever produced by the Arabs. Khaldun’s portrait of Arab national character is that of a historian who could look back on seven centuries of Arab history.

The Arabs, he says, “are people who plunder and cause damage.” The civilizations they conquer are “wiped out.” “Places that succumb to the Arabs are quickly ruined.”

“The reason for this is that [the Arabs] are a savage nation, fully accustomed to savagery …”  “Savagery has become their character and nature. They enjoy it because it means freedom from authority and no subservience to leadership.  Such a natural disposition is the negation and antithesis of civilization.”

“B ecause of their savagery,” says Atai, “the Arabs are the least willing of nations to subordinate themselves to each other, as they are proud, ambitious, and eager to be the leader.”  (Recall Genesis 16:12 on the character of Ishmael: “He will be a rebel.  His hand will be against everyone, and everyone’s hand will be against him.”)

The Arab’s sense of honor is notorious.  Any insult or injury, let alone defeat in war, must be avenged.  The Yom Kippur War was nothing less than an act of revenge for Israel’s victory in the Six-Day War—and that is why the war was launched on the holiest day of the Jewish calendar.

Any bellicose people are well-practiced in deception; as for the Arabs, however, one must add they are unequalled in the art of ingratiation.  Khaldun’s disciple, Taqi al-Din Ahmad al-Maqrizi (1364-1442), an Egyptian, writes that Egyptians “are extremely inclined to cunning and deceit, from their birth they excel in it and are very skillful in using it, because there is in their character a basis of flattery and adulation which makes them masters in it more than all the peoples who have lived before them or will live after them.”

Egyptian President Anwar Sadat’s campaign of deception before the Yom Kippur War is documented in my book Sadat’s Strategy.  But he was also a master of ingratiation. He constantly referred to Secretary of State William Rogers, whom he had met for the first time, as “Bill.” When Secretary Kissinger replaced Rogers, he became “dear Henry” just as quickly.

Countless pundits were deceived by Sadat. A few quotes may dispel their naiveté. In an interview with al-Anwar on June 22, 1975, Sadat said:  “The effort of our generation is to return to the 1967 borders.  Afterward the next generation will carry the responsibility.”

In a New York Times interview dated October 19, 1980, he boasted:  “Poor Menachem [Begin], he has his problems … After all, I got back … the Sinai and the Alma oil fields, and what has Menachem got?  A piece of paper.”

A year after signing the March 1979 peace treaty with Israel, Sadat ominously declared:  “Despite the present differences with the Arab ‘rejectionist’ rulers over the Egyptian peace initiative, the fact remains that these differences are only tactical not strategic, temporary not permanent.”

By the way, in his Knesset speech of November 20, 1977, Sadat used the name of God 10 times in his first ten sentences.  Surely a man of God would not lie about his desire for “peace”—a word he used 95 times in his 50-minute performance!

With astonishing insight, Ibn Khaldun points out that “The Arab can obtain authority only by making use of some religious coloring, such as prophecy or sainthood, or some great religious event in general.”

Patai’s 1973 classic, says de Atkine, “has not aged at all.  The analysis is just as (prescient and on-the-mark now [in post-9/11, i.e., September 11, 2001]) as on the day it was written.  One could even make the argument that, in fact, many of the [Muslim Arab] traits described have become more pronounced.”

Israeli politicians and diplomats are children compared to the likes of Muslim leaders like Palestinian chief Mahmoud Abbas. Benjamin Netanyahu’ ardent desire to negotiate with Abbas would be laughable if it did not have tragic consequences.

Despite Israel’s overwhelming military power, Israel has been retreating toward her indefensible 1949 borders. Like other Israeli leaders, even a savvy politician like Netanyahu has been one of the Arab’s Jewish poodles. Isn’t there an alternative?☼

@ConservNewsView Why #islam has become home to #extremism such as #isis? Read here: https://t.co/IBas8fJk57