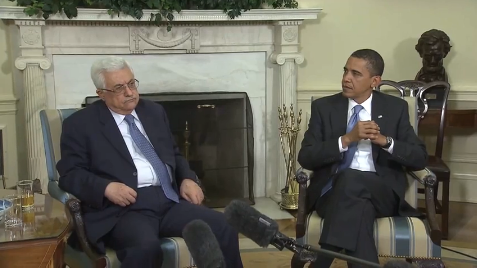 No Jew can feel proud of being Jewish while Israel’s Prime Minister consorts with the murderers of Jewish men, women, and children in servile adherence to the Oslo or Israel-PLO Agreement of 13 September 1993.

Have they no Jewish pride?

Nevertheless, since that infamous day, when Prime Minister Yitzhak Rabin clasped the blood-stained hands of Yasser Arafat on the White House lawn, the Jewish people have been disgraced by Israeli Prime Ministers fixated on the futile and fatal policy of “territory of peace.”  Isn’t this a display of politicians lacking a sense of Jewish pride, of politicians lacking a sense of shame?

Nietzsche defined man as “a creature with red cheeks.” Only man blushes: only man has a sense of shame. Yet not a single Israeli prime minister evinced an iota of shame, as he hastened to hobnob with Yasser Arafat or Mahmoud Abbas and thus inhale the exhalations of these villains.

That September 13, 1993 agreement with Arafat was packaged by Prime Minister Rabin, as well as by then opposition leader Benjamin Netanyahu, as promising an end to Arab terrorism. Yet, the next day, while Arafat was in South Africa, the villain called for a Jihad against Jews and Jerusalem!

How did Israel’s Government respond to Arafat’s declaring a jihad against Jews and Jerusalem on that day of infamy now blandly referred to as the “Oslo Agreement”? 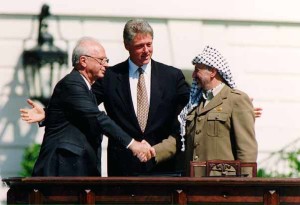 Only the benighted were surprised by Arafat’s brazen violation of Oslo. That agreement pledges the PLO to renounce terrorism and recognize the State of Israel – which Bibi is still demanding, now of Arafat’s successor, Mahmoud Abbas. We are witnessing a theater of the absurd. The price is Jewish blood!

While Abbas has been inciting Arabs to attack and kill Jews, Netanyahu refrains from denouncing these murderous attacks as blatant violations of the 1993 Oslo Agreement, lest Jews wake up and demand that Israel abrogate this Agreement with Jihadis!

Hence I will pose a question never heard in Israel: What would a courageous and honorable Prime Minister of Israel have done in 1993 in response to Arafat’s call for a jihad against Jews and Jerusalem? Would he merely issue a complaint to Washington, the sponsor of Oslo?  Or would he renounce Oslo as no binding and resign!

Unsurprisingly, Mr. Rabin did nothing more than blink.

I say “unsurprisingly” because a few years after Mr. Rabin was appointed Israel’s ambassador to the U.S. beginning in 1968, he appealed to Israeli citizens of American descent to write their Congressman in Washington and solicit their support for Israel – hardly a dignified and diplomatic way to influence America’s foreign policy, but indicative of the servile attitude of Israeli politicians toward the United States.

Mr. Netanyahu is a bit more refined. For example, to bolster Israel’s retention of Jerusalem, he solicits the support of American groups, such as the Conference of Presidents of Major American Jewish Organizations. He tells  these Jews wandering in the wilderness that Jerusalem is not a partisan issue, that Jerusalem belongs to all the Jewish people. And he urges American Jews to lobby their government to revise the U.S. views about the status of Jerusalem. This, he has said, will convince the Arabs to tone down their unrealistic expectations regarding Jerusalem. Not very astute, even presumptuous, for these reasons:

Underlying Israel’s attitude toward the United States is a curious combination of servility and arrogance, corresponding, perhaps, to Israel’s Lilliputian size yet enormous intellectual and moral significance in the annals of mankind.

This reminds me of how the Elders of Israel regarded the Jewish people:

The Elders, challenging as always the Jewish claim to uniqueness, sought to demonstrate that the Jews’ belief in their status as a chosen people was absurd. Their argument took the following form:

You profess that God loves you and has chosen you to be His people because you are spiritually more apt than other nations. Your claim would be reasonable if it were based on the fact that God gave you the Torah. Through the Torah you know more than any other nation about how to carry out God’s will … For that reason God might well love you more than any other nation. We might be able to accept this argument, but not your conception of chosenness unrelated to carrying out God’s will…. Chosenness is comprehensible only as a function of closeness to God.… Obviously your definition of chosenness is nonsense…1

But where does this leave a Jew ashamed of being Jewish!

Netanyahu, do your duty!

Most of the Israeli’s concessions were at the request of America. Recall all the Accords that forced Israel to concede land, etc. the Palestinians ceded nothing. If you step back and analyze the situation you will come to the conclusion, like me, that no matter how much Israel concedes, it is not enough for the Palestinians. Historically in ancient times, the jews were in the area long before the Palestinians. Remember Christ was a jew.

You are correct, nothing will ever be enough until every Jew is forced out of Israel.