The philosophical basis of the “two-state solution” concerning Israel and the Palestinian Authority is the doctrine of moral relativism translated into moral equivalency. We see this doctrine in the book Two Kinds of Faith by Martin Buber. This book levels the irreconcilable differences between Judaism and Christianity despite their ethical overlap. 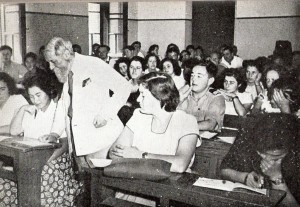 Martin Buber, 1878-1965. Standing in a classroom in the Jewish quarter of Jerusalem in the last days of the British Mandate.

Moral equivalency is the consequence of the German or Hegelian doctrine of historicism or historical relativism. This doctrine places the claims of Jews and Arabs to the land of Israel on the same moral level.

Moral equivalency has contaminated the mentality of Israel’s academic elites. The doctrine entered the Hebrew University of Jerusalem with its academic appointment of the renowned German-educated Professor Martin Buber.

Influenced by Hegelian historicism, Buber wrote, “There is no scale of values for the [world-historical] function of peoples. One cannot be ranked above another.” (Israel and the World, p. 223.)

This moral equivalency appears even in Buber’s testimony to the Anglo-American Inquiry Commission in 1947. Speaking for himself and Dr. Yehuda Magnus (the first president of the Hebrew University), Buber declared, “We do not favor Palestine as a Jewish country or Palestine as an Arab country, but a bi-national Palestine as the common country of two peoples.”

We see here the seed of the “two-state solution” to the Israel-Palestinian conflict. This “solution” was made affirmed by Prime Minister Benjamin Netanyahu on June 14, 2009, when he endorsed the creation of a Palestinian state. However, it should be noted that his endorsement was spawned by the moral relativism or equivalency manifested by the most influential founders and professors of the Hebrew University before the modern State of Israel was established!

In fact, Mr. Netanyahu’s moral equivalency surfaced again on November 23, 2014 when he defended the “Jewish State Bill” in the Knesset, saying: “Israel is a Jewish democratic state. There are those who want democracy to take precedence over Judaism, and those who want Judaism to take precedence over democracy. In the law that I am bringing, both principles are equal and must be given equal consideration” (Jerusalem Post, November 24, 2014, my emphasis).

Netanyahu’s disingenuousness can be exposed by any intelligent high school student who need only ask: “Suppose Muslims become a majority of the Knesset’s membership and vote to transform the Jewish state into a Muslim state. What then, Mr. Netanyahu?”

This pathological dilemma was made official by the Oslo or Israel-PLO Agreement of 1993. However, the reader must bear in mind that the origin of the Oslo Agreement is the university-bred doctrine of moral relativism. This doctrine has polluted the atmosphere not only of Jerusalem, but also of Washington, DC, where it is ensconced in the White House, in the half-educated personality of Barack Obama.

Hence, in the much considered opinion of he present writer, a dual citizen of America and Israel, nothing less than a cultural revolution that dispels the noxious atmosphere of moral relativism will prevent the demise of these two countries, indeed, of Western Civilization, or what’s left of it.◙