Vassar College, a private, coeducational college in Poughkeepsie, NY, has gone from prestigious to pernicious, by reason of its support for the Islamic invasion of the West (America and Europe) and its biased programs against Israel and Jews. Complicit are eight of the college’s 54 academic departments (including “Jewish” studies) that invite radical speakers, such as Jewish Voice for Peace (JVP) and others who advocate the BDS movement (boycott, divestment, sanctions), against Israeli products and American companies that conduct business with Israel.

An ironic speaker comes to Vassar 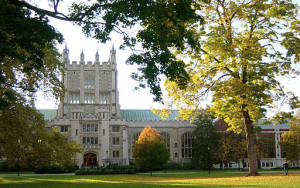 Jashir Puar, Rutgers’ infamous professor of women’s and gender study, who is herself conflicted with, among other things, her own gender identity, was a recent guest speaker. She vigorously demonizes Israel, the only Middle Eastern country that would permit her, a homosexual, to live. Without a shred of evidence, she employed the vicious, centuries-old blood libel and accused the Israel Defense Forces (IDF) of harvesting Palestinian organs, adding that Israelis are poisoning Palestinians with elements, such as Uranium, to stunt their growth. Curiously, she did not mention a Michigan State University report in 2014 about two dozen Syrians who ate the hearts of their victims and died of Kuru, a neurodegenerative disorder associated with cannibalism. Two others were hospitalized for treatment in Germany.

Puar is one of several who present preposterous indictments against Israel to academia’s captive audiences – the unwitting students who listen raptly and the spineless faculty who remain mute during these hate-mongering sessions. Puar, who has been declared a “crackpot” by the NY Daily News, is a dangerous crackpot, who now disallows recordings of her lectures.

Against Puar’s screeds: the facts

Psychologically at odds with her gender and consumed by hatred, Puar favors tyrannical Islam, whose police patrol the streets to enforce Sharia on all and would likely condemn her to 500 – 1,000 lashes and imprisonment, or execution. (The highest number of lashes recorded by Amnesty International was 40,000 for murder.) However, the rich and powerful are explicitly permitted to practice pedophilia, citing supportive versus from the Qur’an and the examples of Muhammad.

If Palestinian growth is indeed stunted, as the professor contends without substantiation, blame may rest with the Qur’an, which declares that Allah made marriage with first cousins acceptable and lawful because Mohammed seduced his first cousin and children as young as 9, and endorses other sexual activities with infants.

Further, consanguineous marriages – those between blood relatives – are an integral feature in Islam, accounting for more than half of all marriages in some nations and leading to a higher incidence of offspring with genetic disorders. Perhaps Islam produces these impaired children to be sacrificed to war and suicide, with a double purpose of culling out the defective results of inbreeding and assuaging the revulsion that accompanies incest and rape.

In 2014, Vassar’s Hillel Union, part of 100-year-old network of Jewish students, professionals and leaders dedicated to enriching the Jewish campus experience, chose to re-define itself as “Open Hillel.” This is nothing less than abandoning their rules that protect Israel and Jewish students, and revealing their willingness to host anti-Semitic speakers (including Students for Justice in Palestine – SJP) who advocate to boycott, divest and sanction (BDS) against Israel.

On February 17, 2016, after several years of discriminatory events and adverse publicity, one outspoken alumnus, CAMERA fellow Jason Storch, succeeded in bringing Palestinian Human Rights Activist Bassem Eid to speak in condemnation of Students for Justice in Palestine (SJP) and the BDS campaign, and to reveal some truths about Israel. Nevertheless, the Vassar Student Association, motivated by the SJP and forty faculty members, enacted their BDS Resolution 30-x.

Citing Vassar College’s mission to provide an education that promotes “analytical, informed, and independent thinking and sound judgment” and nurtures “intellectual curiosity, creativity, respectful debate,” these qualities appear to be limited in application.

The College naively cites the Palestinian civil authorities’ call for “people of conscience” to impose broad boycotts and implement divestment initiatives against Israel, falsely accusing her of apartheid. The facts stand stubbornly against these lies and confirm that there is no apartheid in Israel.

The Resolution cited three goals of the BDS campaign: (1) ending Israel’s occupation and colonization of all Arab lands and dismantling the Separation Wall; (2) recognizing the fundamental rights of the Arab-Palestinian citizens of Israel to full equality; (3) and respecting, protecting and promoting the inalienable rights of Palestinian refugees to return to their homes of 1948.

What does the President of Vassar think she’s doing?

It is time for President Catharine Bond Hill to evaluate her role at Vassar. She has allowed Vassar to become a platform for propaganda in the Islamic war against Israel and the West (Europe and America are also targeted.). By ceding control of the school to one of the most backward and immoral cultures on the planet, she has allowed the concealment or removal of truth from the curriculum, reducing the quality of education and the school’s integrity. These actions encourage further submission to Sharia law, with increased censorship, FMG (female genital mutilation), rape, beheadings, chopping limbs, burning people alive, brutal lashings, stonings to death, and enslavement of her fellow human beings. She has surrendered the school to agents of Islam whose sole existence is to destroy civilization – Kurds, Yazidis, Copts, Christians, Shia and Sunni Muslims, and Israel, one of the most advanced cultures on the planet, from which we benefit greatly in medicine, technology, science, agriculture, water conservation, and more.

If President Hill does not grasp this and Vassar maintains this path, how is she qualified to preside over the college and how does the college continue to qualify for Accreditation? Surely, it is time for her to bring visiting pro-Israel speakers to all the students, to present factual, accurate information about Israel and Palestinian Arabs – speakers such as Professor Alan Dershowitz, Ambassador Michael Oren, Nonie Darwish, speakers from Stand With Us, and others. Vassar had been designated an education institution and it is time that Vassar took the obligation in earnest.

“The only thing more expensive than education is ignorance.” — Benjamin Franklin.

If America’s students are not taught the truth, we will surely pay a heavy price.

With appreciation to CAMERA for its vigilance and research.

Modern liberalism and the death of Western civilization