It says in Jewish sources, such as Nefesh HaTzimtzum, that the dispersal of the Jewish people is a desecration of God’s Name. In principle, this may also be said when a Jew is murdered (God forbid) by Arab terrorists.

Leaving aside unrestricted settlement by Jews of Judea and Samaria, which is as sanctioned by the Balfour Declaration of 1917, the San Remo Convention of 1920, and the Anglo-American Treaty of 1925, what are we to say when the property and civil rights of Jews in Judea and Samaria are violently abused by Israel’s Government or by one of its agencies?

This is more than an academic question. I wonder about how to characterize the hostile acts of Israel’s Government toward the Jews of Judea and Samaria.

Do the Jewish victims regard those hostile acts as a profanation of God’s Name, or merely as hostile political policy without reference to God?

What would be the reaction, or the “climate” of public opinion, if Jewish settlers in Judea and Samaria were to feel and regard that their mistreatment by the Government constituted not merely a political policy, but also as a sacrilegious policy?

I wonder whether the language of the settlers is appropriate to the essence of their grievances.

A lesson from American patriots 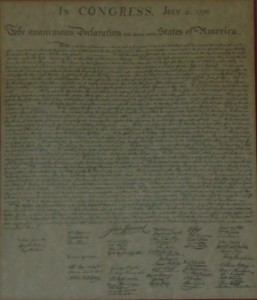 It may be helpful to examine the language used by colonial Americans to describe their grievances toward the British monarchy in 1776, and even to compare those grievances with the unrelenting murderous attacks which Arabs have perpetrated against Jews since Israel’s Government signed the Oslo Agreement of September 1993.

The colonial Americans defined their grievances as violations of “the Laws of Nature and of Nature’s God.” No comparable language is used by the Jewish settlers of Judea and Samaria to describe their grievances vis-à-vis Israel’s Government. Were the Americans of 1776 more Jewish, more learned, or both?☼

Jewish statesmanship for the 21st century