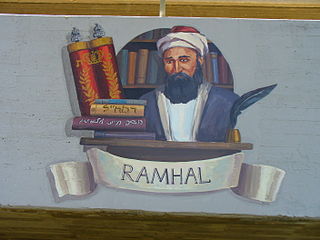 Jewish statesmanship does not exist in Israel. Jews do become prime ministers, as did Benjamin Disraeli and Pierre Mendes France. But no sober person expected Jewish statesmanship from these English and French Jews. No one expected them to incorporate Jewish laws and principles into the legislation of their respective countries, or to pursue foreign policies inspired by distinctively Jewish goals. These Jews did not think like Jews but like Gentiles. Much the same may be said of the prime ministers of Israel. 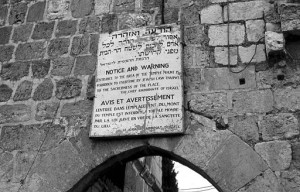 In 1978 this sign forbade entrance to the Temple Mount according to a then-prevailing interpretation of Jewish law. True Jewish statesmanship might help resolve issues like this. Photo: unknown author on Wikimedia Commons, CC BY-SA 3.0 Unported License

If statesmanship is defined as the application of philosophic wisdom to action, then Jewish statesmanship is the application of Jewish wisdom to action. Architectonic statesmen such as James Madison and Alexander Hamilton studied the great philosophers, those who addressed themselves to such questions as “How should man live?” and “What kind of government is most conducive to human excellence?” They employed ancient and modern wisdom in the process of designing a constitution appropriate to the character and circumstances of the American people.[1] Although Jewish statesmen will study the great philosophers, they will delve primarily into the wisdom of Judaism and ask, “How should Jews as Jews live?” and “What kind of government is appropriate to contemporary Israel and conducive to Jewish excellence?”

When we consider, however, the conflicting doctrines of philosophers and the diverse life experiences of hundreds of Jewish communities during the last two thousand years, it will be obvious that Jewish statesmanship is beyond the capacity of ordinary politicians. Still, Jews can ill-afford to leave their destiny in the hands of political hacks and amateurs. This certainly applies to minuscule Israel whose neighbors consist of Arab-Islamic dictatorships.

Jewish statesmanship has three basic prerequisites: (1) statesmen possessing Jewish and secular wisdom; (2) political institutions that enable statesmen to exercise leadership yet render them accountable to their people; and (3) a people whose love of freedom is embedded in a tradition that honors moral excellence, wisdom, and truth.

The Jewish statesman is first and foremost an educator whose power is less political than intellectual and moral. Hence the Jewish statesman must be well educated in the heritage and history of the Jewish People. This is a formidable task, since the knowledge Jews have accumulated during the past four millennia is vast and unsurpassed.

Jews have excelled in virtually every discipline, especially in the domain of law. Consider Jewish law (Halakha), but only so far as concerns the relations between man and man (in contradistinction to the relation between man and God). That we should begin with a consideration of Jewish law in discussing Jewish statesmanship is appropriate if only because Jewish law is the one thing that has preserved the Jewish people and their national identity.

Like other legal systems, Jewish law has various branches, for example, civil and criminal law, public and administrative law. Extant Jewish legal knowledge includes thousands of volumes or hundreds of thousands of instances of case law dealing primarily with the social and economic problems of Jewish communities dispersed throughout Europe and North Africa. Parts of this enormous body of case law is being organized in Israeli universities, and not merely for its historical interest, but for its potential relevance to contemporary problems. (Because case law arises out of factual conditions and resolves existential controversies, it is by no means subordinate to codified law.) This repository of legal knowledge will be available to statesmen. It will teach him important principles of Jewish governance.

First, Jewish law will teach him that no one is above the law; indeed, that God Himself is bound to observe the laws of the Torah (Jerusalem Talmud, Rosh Hashana 1:3a). Hence our Jewish statesman will reject the Latin maxim Princeps legibus solutus est — The ruler is not bound by the law. A relic of this maxim will be found in modern Israel: “No act of legislation shall diminish the rights of the State, or impose upon it any obligation, unless explicitly stated.”[2]

Fourth, since our statesman will be learned in Jewish history, he will know that Jewish law is not static but dynamic, that Judaism reconciles permanence and change. He will know that Jews survived the vicissitudes of the past because, thanks to their great Rabbis, they learned how to adapt to changing circumstances and still adhere to the Torah, mankind’s first written Constitution.

Fifth, our Jewish statesman will know that only this Constitution can unite the Jewish People, and not simply because of the Torah’s world-inspiring wisdom and models of human excellence. For the Torah’s comprehensive and many-faceted system of law can harmonize the social and economic relations of Jews of diverse ethnic backgrounds by providing them with proven and venerable methods of resolving their differences. As Professor Menachem Alon, former Vice- President of Israel’s Supreme Court, has written: “it is precisely in all the branches of Jewish law other than marriage and divorce that it is possible … to arrive at a common language and understanding among various elements of the people who differ in their religious and social outlook.”[3]

Since a vital objective of Jewish statesmanship is to promote Jewish national unity, our statesman must be sensitive to the potentially unifying influence of Jewish law.

Sixth, and as will shown later, Jewish law provides a rational and ethical foundation for representative government. However, to avoid the mischievous tendency of apologists to assimilate Judaism to democracy, the Jewish statesman will assimilate democracy to Judaism. Accordingly, he will derive freedom and equality, democracy’s two cardinal principles, from the Torah’s conception of man’s creation in the image of God. This will provide these two ethically neutral and indiscriminate principles of democracy with the ethical and rational constraints.

Finally, although our statesman will be educated in Jewish wisdom, he will have learned from such masters of Jewish law as Maimonides and the Vilna Gaon that thorough knowledge of the Torah requires veridical secular knowledge. It follows that “Jewish identity” is not a sufficient condition for Jewish statesmanship.Israel’s religious parties have “Jewish identity.” However, because of their long dependence on secular parties, they lack the breadth of vision and spiritedness required for Jewish statesmanship. Regrettably, the narrowness and timidity of Israeli politics have infected them. Without denying the accomplishments of the religious parties, too often they use Torah for politics rather than politics for Torah. The Jewish People require statesmen who strive for the unity of thought and action prescribed in the Torah. Exemplary personal character, however, is not a sufficient prerequisite for Jewish statesmanship. This leads us to a discussion of political institutions.

[1]Eighteenth-century scholars saw in the American Constitution principles rooted in the Torah. See Abraham I. Katsh, The Biblical Heritage of American Democracy (New York: KTAV Publishing House, 1977), ch. 2. See also Paul Eidelberg, The Philosophy of the American Constitution: A Reinterpretation of the Intentions of the Founding Fathers (New York: Free Press, 1968; reprinted in 1986 by the University Press of America), chs. 7, 8.