There will be no shortage of essays and commentary on the subject of Islam following this weekend’s slaughter.  Much of it will be formulated around a complete and very dangerous mindset.  That is, that people who kill the innocent, in the name of Islam are radicals.  That they are rare, they are misguided.  That they operate outside the bounds of a warm and loving religion.  They are simply lone wolves carrying out self-grown hatred spurred on and cultivated by poverty and racism.

Islam is not compatible with liberty, religious or of other kinds

If the people of this country and for that matter, the world, continue down this dangerous and illegitimate path, the autonomy of the planet’s people is doomed.  If the malignancy known as Islam is permitted to continue stealthily embedding into our society, there will come an irreversible point in time when everyone will be forced to concede their own religion, forsake their personal and generational concepts of God, allow their beliefs in freedom to be bastardized or suffer the consequences of the neighborhood Jihad.

I have spent many hours reading the several interpretations of thousands of verses in the Koran.  While some interpreters may appear to be riding the moderate train, it is my belief that much of those interpretations are for the consumption of the infidels.  Softening the rhetoric, exchanging Allah and using the word God in an attempt to mire those who are easily manipulated into believing that their god is your God.  It is not.

What god would condone or require the slaughter of innocent people.  People he created, people he brought into awareness life and death, of good and evil?  The answer is no god.  Islam is of man not God. Islam is brutal.  Islam is bloody.  Islam is radical.

The majority of the interpretations however are startling, frightening and downright horrendous.  This work is not about any loving god, mine or yours.  It is a document designed for massive and worldwide control.  Hate and fear are the tools.  It is nothing more than a dictatorial form of government which uses the damnation of an invented god to prevent decent by instilling earthly fear and eternal hell.

How law really works under Islam

I’m not going to tell you that I have read every word or perused all 114 Chapters and the extensive ramblings and reiterations of those verses.  Because I certainly have not.  But what I will tell you is this.  The Koran has been authored for the purpose of creating dread of their god in an attempt to control and enslave the people.  Many times over it provides Islam with the right to tax the people, to enslave and kill the infidels and issues heavenly rewards to those who comply.

There is no method of fairness either in trials or investigations.  Islam convicts and punishes perceived infidels or those who have dared to awaken from the cult.  There will be no review of charges only the dreadful stoning, drowning, burning or beheading as decreed by some creature calling himself god’s messenger.  Throughout the entire manifesto, the reader is reminded of Allah’s wrath and that of his soldiers here on earth.  While there are several mentions of Allah’s love for his believers, it is clear their god has no compassion for infidels.

Many Chapters, those that I have spent the most time on are some of the most unholy and scary words ever put to paper.  They describe the position women have in the world of Islam.  They describe the reasons and methods that a husband can use to beat his wife or take her life if he deems her to be impure.  They describe how a man can divorce any of his many wives just by declaring it.  Men can take as many wives as they choose but if a woman has more than one lover or engages in sex before marriage the people in the village can stone her to death.

In other loving verses homosexuals are described as evil and unholy and they should be sought out and killed.  In fact, this day in time, there are 11 Islamic countries that execute gays or lesbians, simply for being gay or lesbian.   Not what one would call moderate.

Slavery is abided, taking the property and life of non-believers is not just suggested but required.  Those whom do not seek out and kill infidels are considered to be sinners themselves and are threatened with the eternal fires of hell.

If you wonder how two Islamists could murder their friends and coworkers even after they were given a baby shower for their child, wonder no longer.  The Koran provides for deceitfulness when dealing with infidels and demands that they be sought out and killed. 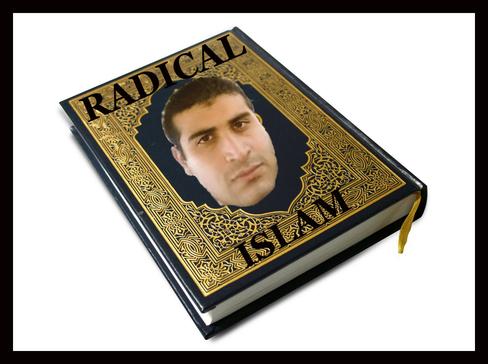 Just after the slaughter in Orlando, Omar, believer and practitioner of Islam was deemed to be a lone wolf.  He was not.  He was merely practicing Islam as it is written and taught.  The murdering scum’s father made a statement to the press in which he said religion had nothing to do with his son’s murderous rampage.  You might be surprised, but I totally agree with that statement.  But not for the reasons ole’ poppa said it. His reasons were inspired by his desire to lay cover for Islam so it can continue to infest the world.  I agree that religion had no impetus in this carnage because Islam is not a religion, it is an historical bloody form of government which uses religion to coerce and control the people.

Finally isn’t it telling that both that Imam in Florida and the Christian hating Muslim posing as our President agree that more gun control is needed?  How very precious that is.  As Obama continues to bring in over one hundred un-vetted Muslims from Isis dominated parts of the world, not knowing how many of them intend to invade our homes, kill us on the streets, shoot us down where we work and play, our great leader thinks it’s best if we are incapable of defending ourselves.  The Florida Imam thinks that is a great idea too.  After all who wants some armed American citizen to be able to blow the brains out of the next Islamic executioner?

Speaking of that, the men and women in this country will not stand by and let this cancer grow to the point where they can’t go out of their homes without fear of being slaughtered by an Islamist.  Oh, they might be slow to anger.  They might be slow to awaken, but when they do, take this as a warning to all Muslims and Islamists, we will not stand idle while our families are butchered.  Americans will not be the patsies such as those in Paris and England.  Once we have awakened, and with the help of our true God, not Allah, the threat of Islam will be eliminated.

So if there are any Muslims who have awakened to the murderous teachings of the Koran, it may not be too late.  It will take courage. It will take sacrifice.  But if Islam is to survive and be a religion as opposed to an oppressive form of tyranny the entire body and text of the Koran needs to be vetted, edited and transformed into a document of God, not man.  I say this with all sincerity but also with the knowledge that that will never happen.  If it does not, the world is headed for some very rough years ahead.

The so called non radicals are complicit. We’re at war with all of them. imo

The San Bernardino shooters were peaceful neighbors until they weren’t.

Daddy is Taliban he radicalized his son.

Islam is in itself radical. Those who take to heart the verses of hate from the Koran are not the radical Muslims – they are in reality following their militant founder. Those who disregard the Koran verses allowing violence against infidels are the radical Muslims because they go against their founder and their holy book. My question to them is – if you seek peace, why do you follow a religion that tells you to convert, tax or kill infidels like me?