Arthur Ochs Sulzberger, Jr., publisher of The New York Times, and Dean Baquet, executive editor, issued their reflection to their readers. After reviewing it several times, I realized that the election of Donald J. Trump to the highest office in our country did much more than anyone could have anticipated. Not only did Trump fight the establishment, press and academia, and motivate American citizens to awaken from an eight-year period of fear and despair to demand a reversal of Obama’s executive orders, but he inspired the principals to make an unprecedented outreach to the public with a kind of desultory apology.

They professed a purpose of rededication “to report to America and the world honestly, without fear or favor, striving always to understand and reflect all political perspectives and life experiences in the stories…impartially and unflinchingly.” Although it was their use of biased analyses and writing assumptions over inaccuracies that diminished their readership, it is evident that they miss the point when they attempt to reassure their depleted readership that they can they can “rely on The New York Times to bring the same fairness, the same level of scrutiny, the same independence to our coverage.” It is precisely that same coverage and same corruption that the American public will no longer tolerate.

Is it possible for a publisher and executive director to plan for a future without defining and owning up to the past? Will they re-educate the same staff writers who pandered to the establishment, the leftists and the globalists; the Soros- and Islamic-supported hatemongers of (BLM) Black Lives Matter, J-Street, (SJP) Students for Justice in Palestine and the (MSA) Muslim Student Association; the anti-Semitic revisionists; the corrupt elitists and academicians who delight in seeing their skewed views validated; the youths, immersed in socialism, who have been taught not how to think, but what to feel; and the populace that could not discern fact from propaganda?

Lies the Times tells about Israel

Upon what standard lies were the Times readers nourished? When the Times repeatedly accused Israel of planning new “developments” northeast of Jerusalem that would allegedly split Judea-Samaria (West Bank), despite the map that was produced to prove the impossibility of their claim, a correction was never issued. When they claimed that singer-songwriter Eric Burdon was boycotting Israel, it was another falsehood not rescinded. When an article blamed Ariel Sharon’s entry into the Al Aqsa mosque in Jerusalem in 2000 for triggering the second intifada, the truth was that Sharon never entered the mosque and the second intifada was verified to have been planned in advance.

The Times repeatedly asserts that Gaza is occupied by Israel, but Israelis left in 2005 and Hamas is the sole occupier. When John Kerry spoke about brokering peace between Israel and Palestinians, and The New York Times amended it with a Palestinian narrative. Israel is routinely portrayed by the Times as being the obstacle to peace, while the Palestinians have consistently rejected all Israeli positions.

The Times overlooks Israel’s archaeological and historic ties to the country, her amazing technological and medical achievements, and her first-responder activities to America’s Boston Marathon, California droughts, and countries hit by natural disasters. The infamous slaughter of the Fogel family never made first page, and Israelis beaten or knifed are often disregarded. Further, the Times omits stories of Palestinian children practicing jihad and beheadings or declarations that they intend to harvest Jewish skulls. The reporters restructured stories of Boko Haram’s terrorizing and systematically kidnapping, converting and killing Christian female students in Nigeria, or burning students to death, and butchering entire villages while intoning Allahu Akbar, Allah is the greatest.

Following the UNHRC, United Nations Human Rights Council’s resolution to blacklist Israeli companies that operate or trade with Israel beyond the 1949 Armistice Lines (Obama’s arbitrary division), a bipartisan legislation, titled Protecting Israel Against Economic Discrimination Act was introduced to combat the Boycott, Divestment and Sanctions (BDS) movement against Israel. It would also now include international organizations that strive to economically isolate Israel.

Another major assault on Israel is UNESCO’s denial of the 3,700-year Jewish connection to the Land of Israel – the 400-year monarchy and the constant link of Jews to their land, verified by archaeological discoveries. Legitimate critics accept Israel’s right to exist; anti-Semites do not, and the Times has opted to join the United Nations in this civilizational jihad by querying the strong biblical and historical basis for the Jewish claim to divinely promised land. Although Palestinians claim Jerusalem’s holiness, it is not mentioned in their Koran and, despite oil money, they allowed it to turn to squalor – without running water, electricity, or plumbing. Youths have been videotaped playing soccer with real severed heads on this “third holy site of Islam.” 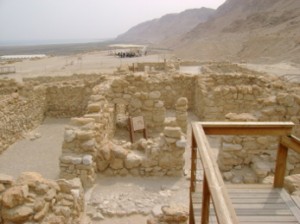 The village at Qumran where the Essenes wrote and packed the Dead Sea Scrolls. Photo: CNAV

Another offensive is the latest Palestinian claim to the Dead Sea Scrolls. Unable to conquer Israel by warfare, they use the UN and media, including a cooperative New York Times. Jane Cahill, archaeologist and practicing attorney, in her Times article “Historical Certainty Proves Elusive at Jerusalem’s Holiest Place,” claimed that standard proof is not beyond a reasonable doubt. Predictably, we see the Times’ blend of witlessness and malevolence. Reporter Rick Gladstone also contested whether the Jewish Temples were precisely on that spot or a small distance away, suggesting Zionist aggression. History proves that Islam builds atop other religions’ holy sites and that the Dome of the Rock, never mentioned in the Koran, was constructed precisely over the Temple because they acknowledged its sanctity to the Jews.

CAMERA’s (Committee for Accuracy in Middle East Reporting in America) six-month study of The New York Times found it replete with skewed headlines and misleading photos, supporting a double standard that de-emphasizes Palestinian attacks and avoids revealing Israeli fatalities. When reporting of Israeli retaliatory strikes against Palestinians for Israeli casualties, the Times will often use a photo of a grieving Arab mother.

Ira Stoll wrote of several issues covered by the Times, from which I chose the following to illustrate the nature of their leanings. In 2016, the paper’s art section featured an exhibit, “The First Jewish Americans: Freedom and Culture in the New World,” at the New York Historical Society (in New York for New York readers), in 1100 words with three photographs. It should be noted that the exhibit included paintings, one of them of Commodore Uriah P. Levy, War of 1812 naval hero and philanthropist who was instrumental in abolishing flogging. Other items were threadbare memoirs and prayer books that withstood the centuries, a charred Torah scroll, a pair of exquisite silver-belled ornaments crafted for a Torah scroll by venerated silversmith Myer Myers, an ancient illustrated marriage contract, and thank you letters from Jewish congregations to George Washington for being so welcoming.

Despite the beauty and solemnity of the exhibit that validates a culture that contributed to every component of American history, the New York Historical Society’s president, Louise Mirrer, provided a demeaning quote, in which she joins The New York Times in the blame-the-victim mentality: “In the exhibit, we see the kind of religious fervor that promotes a kind of violence against certain groups.”

Now compare this to another Times exhibit, “The Art of the Qur’an: Treasures from the Museum of Turkish and Islamic Arts,” not held in New York (home of the readers) but at the Sackler Gallery, Washington, DC. This rated a review on the front cover of its weekend arts sections, warranting 1700 words, seven photographs, and about three times the column space. Instead of a demeaning quote there was exaltation, “It’s a glorious show… art of a beauty that takes us straight to heaven. And it reminds us of how much we don’t know — but, given a chance like this, will love to learn — about a religion and a culture lived by, and treasured by, a quarter of the world’s population… everything seems to glow and float, gravity-free… miraculously beautiful things.”

Will the Times reform?

How will the “new” New York Times re-educate its readers about the ties between the holy site of the Temple Mount and Jewish history, and retract and revise its previous delegitimization and denial of the Jewish people’s right to their Jewish homeland? A friend to fascism, with decades of unprofessionalism dating back to the Holocaust, the Times has ignored all pertinent evidence that does not support the Muslim narrative, thereby denying the Jewish State and the right of Jews to live anywhere in their country. How will the Times present the Palestinians as they now challenge the 99-year Balfour Declaration that paved the way for Jewish and Arab states in Palestine, as held by the United Nations’ majority vote? How will the Times handle the recent Muslim ultimatum to either build mosques in Italy or surrender the Vatican? How will it present Hamas-CAIR’s threat to overthrow the U.S. government?

On the home front, when separate swim times were established to accommodate Muslims in Toronto, the Times praised it as a “model of inclusion,” but when a Brooklyn pool did the same to accommodate Orthodox Jewish women, the Times denounced the practice. The paper also denounced the use of chickens in a Jewish ritual, but reported impartially about a Senegalese ritual involving caged birds. Such disparate evaluations are typical of the Times and if they continue to treat their readers to “the same fairness, the same level of scrutiny, the same independence to our coverage,” then a vanishing readership is predictable.

The more the Times changes, the more it stays the same

With the election of President-elect Donald J. Trump, and heightened tensions, The New York Times ran AP (Associated Press) information with the fear-provoking headline, “Hate Crimes against Muslims up by 67 percent in 2015.” Not only does this fault Mr. Trump, but in a nation of more than 300 million Americans, of which 2.57 million are Muslim, only 257 crimes against Muslims were reported, and not all violent. Such reporting supports the narrative that America is a racist country – the accusation of racism is a form of jihad to depict Muslims as victims and to reinforce Islamophobia against our freedoms of speech and the press. Omitted were the FBI statistics of 664 hate crimes against Jews, an increase of 9 percent, and the dozens of false accusations against Trump supporters.

Will The New York Times, AP, and other news sources rethink their purpose and values, or join the dustbin of history?

More than 70% of the American people expressed their distrust of the media during the 2016 election period; it appears that the proverbial cat is out of the bag. President Obama has had his personal records permanently sealed from public scrutiny and, by contrast, President-elect Trump has been in the public eye all his adult life and recently hosted a show of his life on Fox News Channel, yet Sulzberger and Baquet called Trump an enigmatic figure. We naturally conclude that the promises issued by The New York Times will not be worthy of the paper on which they were printed and signed, and that the operative word will be the thrice-repeated “same.”

There are those amongst us that roam these United States of America, better known as the “walking dead”. Their apology is fake.