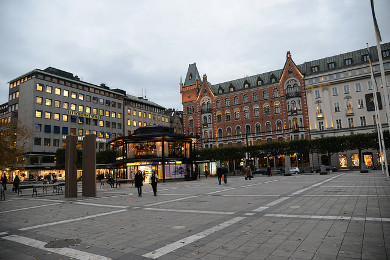 The Stockholm syndrome or “capture-bonding,” is a psychological phenomenon in which hostages express empathy and sympathy, and thus have positive feelings, toward their captors, sometimes to the point of aiding them.

There may be a subtle connection between the Stockholm syndrome and the negative symptoms of schizophrenia, such as escapism, apathy, flattened emotional or affective reactions, impairment of volition, and lack of self-esteem – symptoms exhibited by Israeli prime ministers who engage in negotiations with the Palestinian Authority, and who thus try to appease or “bond” with the Muslim-Arab leaders of the PA via the policy of “territory for peace.”

Note first that the Israelis treat the Palestinian Authority as equals, which is precisely what is implied in Benjamin Netanyahu’s negotiating mantra of “reciprocity.”

Second, this equality and sympathy with the PA puts the sympathizer in the place of the PA, which obscures the PA’s hostile and murderous character.

…to irreversible and destructive change

Fourth, the extreme tolerance or non-judgmental character of liberal democracy is a mental disorder. It conflicts with the concept of man as the esteeming animal, as well as with the most basic instinct of living creatures, self-preservation. Given this mental disorder and absurd degree of tolerance, the victims targeted by Muslims tend to become Muslim allies, which is quite consistent with the Stockholm syndrome!

Fifth, Israeli Prime Ministers, beginning with Yitzhak Rabin, consorted with the Palestine Liberation Organization (PLO) in 1993. That one fact compelled these prime ministers to conceal the murderous character of the PLO. This constant concealment transformed these Israeli prime ministers into serial liars like Israel’s Arab enemies. That transformation effectively made these Israeli politicians accomplices in the PLO’s phased strategy to truncate and destroy Israel.

Finally, there is no way a future Prime Minister of Israel can expose the mendacity of his predecessors without incriminating them and collapsing the State of Israel. I dare say that short of God’s intervention, the future of the State of Israel is questionable. Or as I “whispered in the wind” years ago, the secular structure of the present State of Israel, and therefore the kinds of men who become Israel’s rulers – men susceptible to the Stockholm Syndrome – this State, qua state, must perish if Israel is to survive.

A secularistic setup created the problem

Let me reformulate the dilemma. The modern State of Israel is the product of disciples of Theodor Herzl, that is, by secularists. They wanted to create a new kind of Jew or new Jewish dispensation. This would in fact be a quasi-Christian dispensation that would relegate the Torah to the home and the synagogue. It would thereby sever the State and Statecraft from the Torah or Jewish law. This artificial State qua state must perish for Israel to survive. And the demise of this State is the logical end of its Oslovian foreign policy; for the logic of “territory for peace” with Israel’s implacable enemies, manifests the Stockholm syndrome. This policy has but one end, the incremental truncation and annihilation of the State.

And so, a propos of Stockholm, Israel may become like Sweden, a nation that renounced its Swedish heritage!

Given the man-made and inauthentic Jewish character of this dysfunctional State, which knows only of secularists and a token of religious non-entities at the helm, it is no wonder that the Arabs ironically but providentially refuse to recognize Israel as a Jewish State! Since its highest goal is mere security, this mundane State degrades the Holy Land. Thus it denies Israel’s unique and exalted Sinai Covenant. Notwithstanding Israel’s scientific accomplishments, we behold in Israel a State that has lost, with Sinai, its moral purpose. Indeed we behold a State whose leaders have made Israel a pariah instead of a light among the nations. This timorous State appeases its cruel enemies and desperately yearns for the approval of the nations. And it must perish as a state if Israel qua Israel is to survive.◙