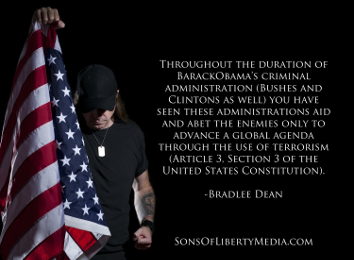 “You had to attack civilians, people, women, children, innocent people, unknown people far removed from any political game. The reason was quite simple. They were supposed to force these people, the Italian public, to turn to the state to ask for greater security.” So said Vincenzo Vinciguerra, in a brazen attempt to justify Operation Gladio, in which he took part. And what was that? Nothing less than terrorism by the government of Italy – against their own people.

Throughout the duration of Barack Obama’s criminal administration (Bushes and Clintons as well) you have seen these administrations aid and abet the enemies only to advance a global agenda through the use of terrorism (Article 3, Section 3 of the United States Constitution).

Terrorism is the best political weapon for nothing drives people harder than a fear of sudden death. – Adolf Hitler

The only people who don’t want to disclose the truth are people with something to hide.

To answer Barack’s statement, let me help things along so you can understand more clearly as to what is going on today.

George Soros stated that the “main obstacle to a stable and just world order is the United States.”

We will have a world government whether you like it or not. The only question is whether that government will be achieved by conquest or consent.

So, we can clearly see that America is still under threat of terrorism, both within and without.

And if ye shall despise my statutes, or if your soul abhor my judgments, so that ye will not do all my commandments, but that ye break my covenant: I also will do this unto you; I will even appoint over you terror… – Leviticus 26:16

The question that we need to answer here is:

Who are the terrorists?

First, those who have been given a free hand to do what they will because the people have left off God’s commandments when it comes to despising His statutes and abhorring His judgments. These are the real terrorists, who are committing the crimes like that of the past and proceeding administrations in America.

You would think that now Donald Trump is the president, he would have the intelligence to expose the guilty parties. It does not get more obvious than Bush, Clinton and Obama!

“A history of false flag attacks used to manipulate the minds of the people! In individuals, insanity is rare; but in groups, parties, nations, and epochs it is the rule.” ― Friedrich Nietzsche

We have learned from the annals of history that there are many documented false flag attacks, where a government carries out a terror attack, and then falsely blames its enemy for political purposes.

This is nothing new (Ecclesiastes 1:9).

Forty-two examples of terrorism by government

In the following 42 instances, officials in the government, which carried out the attack (or seriously proposed an attack), admit to it either orally or in writing:

The Middle East and Mediterranean

From Gladio to Bay of Pigs

Where did they get those weapons?

In addition, two-thirds of the City of Rome burned down in a huge fire on July 19, 64 A.D. The Roman people blamed the Emperor Nero for starting the fire. Some top Roman leaders – including the Roman consul Cassius Dio, as well as historians like Suetonius – agreed that Nero started the fire (based largely on the fact that the Roman Senate had just rejected Nero’s application to clear 300 acres in Rome so that he could build a palatial complex, and that the fire allowed him to build his complex). Regardless of who actually started the fire, Nero – in the face of public opinion accusing him of arson – falsely blamed the Christians for starting the fire. He then rounded up and brutally tortured and murdered scores of Christians for something they likely didn’t do.

We didn’t include this in the list above, because if Nero did start the fire on purpose, he did it for his own reasons (to build his palatial complex), and not for geopolitical reasons benefiting his nation.

The use of the bully’s trick is so common that it was given a name hundreds of years ago.

“False flag terrorism” is defined as a government attacking its own people, then blaming others in order to justify going to war against the people it blames. These are covert operations conducted by governments, corporations, or other organizations, which are designed to appear as if they are being carried out by other entities. The name is derived from the military concept of flying false colors; that is, flying the flag of a country other than one’s own. False flag operations are not limited to war and counter-insurgency operations, and have been used in peace-time; for example, during Italy’s strategy of tension.

The term comes from the old days of wooden ships, when one ship would hang the flag of its enemy before attacking another ship. Because the enemy’s flag, instead of the flag of the real country of the attacking ship, was hung, it was called a “false flag” attack.

Indeed, this concept is so well-accepted that rules of engagement for naval, air and land warfare all prohibit false flag attacks.

Representatives throughout history have acknowledged false flags and the danger of false flags:

Why of course the people don’t want war … But after all it is the leaders of the country who determine the policy, and it is always a simple matter to drag the people along, whether it is a democracy, or a fascist dictatorship, or a parliament, or a communist dictatorship … Voice or no voice, the people can always be brought to the bidding of the leaders. That is easy. All you have to do is to tell them they are being attacked, and denounce the pacifists for lack of patriotism and exposing the country to danger. It works the same in any country. – Hermann Goering, Nazi leader.

The easiest way to gain control of a population is to carry out acts of terror. [The public] will clamor for such laws if their personal security is threatened. – Josef Stalin

Now that President Donald Trump has taken office, a majority of those who were fed up with the likes of the foreign criminal Barack Hussein Obama have now fallen asleep.

Donald is there now to take care of us, say so many in this country. “No need to worry over anything, at least not for the next 4-8 more years,” they say (Ephesians 5:14). Really?

Regardless, if you want to see things for what they are or not is irrelevant! Judgment is going to continuously rain (Genesis 7:12) on this country until Americans realize that their sins are before God (Number 32:23).

America, you cannot advocate what God condemns (regardless of what any president advocates) and prosper. Sodomy (Leviticus 18:22), abortion (Proverbs 6:17), corruption in the church and in the government, etc. are all things the Lord abhors (Proverbs 14:34).

Furthermore, it is time for bring forth fruits of repentance by cleaning house (Matthew 3:8). Now is that time.

The political movement that cried Soros