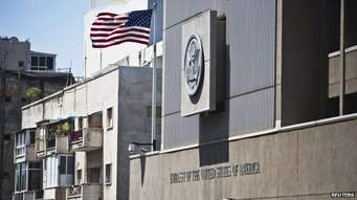 The author of The New Yorker’s “The Power Politics Behind Trump’s Jerusalem Declaration” is Raja Shehadeh. His surname (usually spelled Shahada) is the oath of allegiance, conversion, and pledge of unwavering support of Islam. By extension that includes the Islamic cause of conquest, employing any method that suits their purpose.

No Moslem ties to Jerusalem

The topics of Jerusalem, Israel and Jews, are an age-old thorn in the Moslem psyche because the Jews of Mecca and Medina refused to convert to Mohammed’s faith in the 7th century. No matter the brutality and blood spilled, the children sacrificed, the civilizational progress forfeited, Moslems have been trained since birth to carry on the traditional hatred. Their craving notwithstanding, there is no binding connection of Palestinians to Jerusalem.

Islam’s severe Sharia law is brimming with supremacism and Jew-hatred. Andrew G. Bostom’s The Legacy of Islamic Antisemitism: From Sacred Texts to Solemn History, is “a comprehensive, meticulously documented collection of scholarly articles [that] presents indisputable evidence [of] a readily discernible, uniquely Islamic antisemitism – a specific Moslem hatred of Jews.”

Canonical sources sanction and authorize bigoted and violent Moslem behaviors towards Jews, and the hatred is clearly based on the Jews’ refusal to abandon their own scriptures for Mohammed’s religion.

The current Cause Célèbre is President Trump’s declaration that he will move the US Embassy from Tel Aviv to Jerusalem, the eternal capital of the Jews, a traditional location. Not that this is the end-all grievance, because Moslems have a never-ending array of grievances, and their hatred of all things non-Moslem, especially the Jews, is their mother of invention.

Moslems have killed an underestimated 270 million people over 1400 years, annihilated full cultures to acquire adherents to their political and religious ideology, in addition to land and booty, and have continued their millennialist war against five religions worldwide – the Koran-inspired atrocities against Christians across Islamdom in 2013, among the most recent. Can the writer and New Yorker truly believe that President Trump’s rescinding his announcement would suddenly transform barbarians into peaceful neighbors?

In his article, Shehadeh accused President Trump and Prime Minister Netanhayu of destroying the “peace process [that] might lead to an independent Palestinian state, and condemning Israelis and Palestinians to “perpetual conflict.” He is employing taqiyyah (Koranic-sanctioned holy deception), for this man is surely learned in the Islamic modus operandi used throughout history.

All Islamic history is perpetual conflict. Rather than accept the land granted by the Palestine Mandate confirmed by the Balfour Declaration and the League of Nations, the Arabs characteristically opted to wage perpetual conflict. Rather than establish a state in Gaza and Judea and Samaria, and live harmoniously with their neighbor, they chose violence. There is no Moslem-populous or -majority nation today where there is not innocent blood being copiously shed.

The New Yorker staff should also be aware that there was never a country or state of “Palestine” and that the designation “Syria Palaestina” was given the region by the vindictive conquering Romans in the hope of erasing the Jewish tie to the land. And the Philistines, the root of the name Palestine, had disappeared from history during the Neo-Assyrian Empire (911-605 BC). Today’s “Palestinians” are the people from Jordan, Syria, Lebanon, Yemen and Egypt who migrated to the nascent state of Israel for employment, and revived the invented name “Palestine” as a result of defeat in their aggressive war against Israel and their guile to fabricate a history for a political link to the land.

It should come as no surprise to learn that Jerusalem is never mentioned in the Koran, but it is mentioned 806 times in the Hebrew Bible, and 146 times in the Christian Bible. Further verification lies in today’s Palestinians’ surnames that reflect their origins of Jordan, Syria, Lebanon, Yemen, and Egypt.

The UN’s partition plan of 1947 gave Jerusalem to neither the Jews nor the Arabs, envisioning it, instead, as an international city, even though Jerusalem was always – for more than 3,000 years – considered the Jewish capital and the Temple Mount its holiest site. However, the Arabs rejected the entire partition plan and attacked Israel in 1948, and Abbas would never give up their “single-minded goal ”to erase Israel. Shehadeh claims that the Palestinians called for Jerusalem to remain undivided and the capital of both Israel and Palestine, while Hamas declared full Palestinian sovereignty over Islamic and Christian holy places.

What about East Jerusalem?

Shehadeh also falsely stated that East Jerusalem was a vital part of the West Bank until the Israeli occupation in 1967, when, in fact, Jordan captured it from the indigenous Jews and Arabs in 1947, expelled the Jews, and illegally annexed that section in 1948, until they lost their next attack in 1967. Article 80 of the UN Charter “preserved the Jewish people’s rights to rebuild the Jewish homeland and closely settle the Palestine Mandate, which encompassed Jerusalem.”

Shehadeh went on to protest the separation wall that limits Palestinian access to Jerusalem, which has proven to prevent deadly terrorist attacks. To remove the wall would be foolhardy and dangerous to Israeli citizens and visitors alike. This is nothing new, for out of a total of sixty-five countries that erected protective barriers to safeguard their people, Israel alone is regularly condemned.

Shehadeh also insisted settlement construction violated international law, hindering the future formation of a viable Palestinian state – another fabrication. The settlements, a term meant to be derogatory, are legal and orderly housing developments located on less than three percent of the West Bank. They hinder nothing, and it is Abbas who has made a viable Palestinian state impossible. The New Yorker should occasionally refer to facts before rushing to press.

Additionally, despite Shehadeh’s claims, Abbas is far from moderate, as he is known for encouraging Intifada, knifings and suicide attacks, and generously rewarding parents for forfeiting their sons’ lives to kill Israelis. Abbas has never satisfied an Israel’s demand for negotiation, while Israel has evicted Jews from their homes and relocated them, leaving entire villages complete with schools and successful greenhouse businesses for the new Arab residents, only to be met with a new barrage of rockets – and in ingratitude; the Arabs destroyed the beautiful villages. The writer’s statements are fallacious.

The history of Islam is a chronicle of an aggressive, conquering people, using invasion, violence, no-go zones, rape, stealth, propaganda, bigamy and high birth rates to overwhelm their usually peaceful non-Islamic neighbors in the Middle East, Africa, and beyond. The tactics continue to this day, as Moslem control grows over the people of Malmo, Sweden; Paris, Amsterdam, Antwerp, Berlin and Cologne, Birmingham and Bradford in the UK; Paris and Marseilles, and more. And, to the current battle for Jerusalem, we must add the UN’s complicities to the mix of deadly tactics.

They want it all

The Arabs had many chances to establish a state and capital in Ramallah, the home of Arafat’s compound in Judea and Samaria (West Bank), but they declined every offer for peace and statehood alongside Israel because they will settle for nothing less than the entirety of Israel. The same mentality exists behind the ongoing Islamic conquest of Sweden, Germany, France and England. Contrary to Shehadeh’s allegations, Abbas has never satisfied any of Israel’s demands to stop immersing their children in war tactics, stop fomenting hate, the incessant firing of rockets, and rewarding families for sending their children on suicide missions and murder. The New Yorker has become a willing partner to Shehadeh’s lies, taqiyyah, and propaganda.

Collectively, the Islamic states possess a thousand times more land mass than the extent of the single Jewish state. Had they really wanted peace, the Moslem leaders might have welcomed their returning brethren rather than isolate, invent and victimize the Palestinians to delegitimize Israel. Or, the isolated Arabs might have created their own home, enjoyed the benefits of industry and trade with peaceful nations, and improved life for themselves and their children. But this is obviously a centuries-long obsession from an ideology that pursues world domination under the guise of a religion and, sadly, the New Yorker has provided the platform. We may well wonder how long before the New Yorker provides a platform for another jihadi who will openly demand New York – and then America – for Islam.

European Civilization Is Circling The Drain