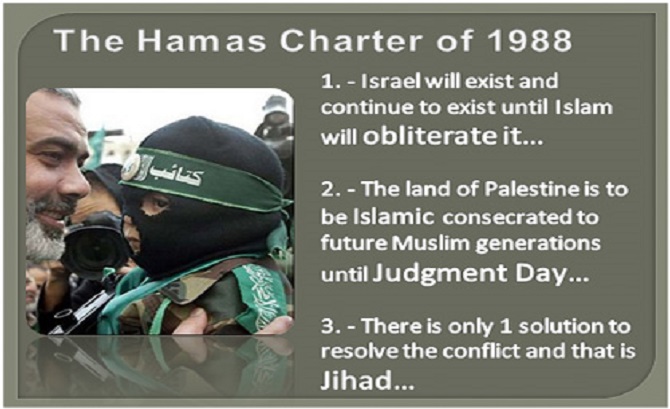 A few weeks ago, I turned on my computer, and saw the most outrageous video of the year. The “brave” teenage and twenty-something Palestinian “revolutionaries” in Gaza, “resisting the occupation” by the border fence, throwing rocks at the IDF, then retreating behind what looks to be a boy of 4-5 years old. Brave Palestinian revolutionaries, using little children as Human Shields. In another scene, a small boy is seen kicking and flailing his arms trying to escape someone wearing a Red Crescent vest, who seems to be trying to put him in the line of fire. The Hamas latest Theater of the Absurd production: “Cannibals in Gaza,” was in full swing.

Sure, the loony Left will say, “they are training them to participate in the Palestinian Revolution.” But by what standards of humanity are they behaving? Certainly not what we thought we had evolved to by the 21st Century.

But Hamas continued this production for weeks, using the Arabs in Gaza as cannon fodder. Since then, there has been the spurious Palestinian claim, that an eight month old baby named Lila Randur, who was brought to the scene of the riots, died from inhaling tear gas. Also, Hamas refused to allow into Gaza, Israeli trucks with medical supplies. For what purpose? To boost the body count?

About the baby, IDF Spokesperson Major-General Avihai Adre’i responded that, “testimonies collected by the IDF, undermine the credibility of the Gazan Ministry of Health’s announcement regarding the death of the baby.”

A Gazan doctor told the Associated Press, that the baby was known to have had a preexisting medical condition. He did not believe her death was caused by tear gas.

But think about this. Even if it’s true that the baby died from tear gas, what kind of parents would bring an eight month old baby, deliberately to the front lines of a war zone? And, using a dead baby as a prop, or, is that propaganda weapon against Israel?

Where are all the child’s rights activists of the world? Why aren’t they crying out at the abusive behavior of the Palestinians toward their children?

Confirming: Hamas did the demonstrating

Soon after the bloodiest clashes, which saw 62 Palestinians killed, the IDF Spokesperson’s Unit, announced that after a joint investigation conducted by the IDF and the General Security Service, at least 24 of those killed, in the Gaza border riots, were terrorists affiliated mostly with Hamas, and a few from Palestinian Islamic Jihad. Proving the Israeli claim true, later, Hamas Politburo member Salah Bardaweil boasted, in an interview with the Palestinian Baladna news outlet, “In the last rounds of confrontations, if 62 people were martyred, 50 of them were Hamas.”

IDF spokesperson Lt. Col. Jonathan Conricus said in response, “This proves what so many have tried to ignore, Hamas is behind these riots, and the branding of the riots as ‘peaceful protests’ couldn’t be further from the truth.”

Then, Iranian backed Palestinian Islamic Jihad claimed, that three members of its Saraya al-Quds military wing, were killed by Israeli forces in Khan Younis. So 53 of the 62 killed by IDF sharpshooters and others, were in fact “fighters” intending violence, not peaceful protesters. The production must go on, it doesn’t matter that over 2,500 “actors” were injured.

The IDF has a witness!

One rioter, who was captured by IDF soldiers after breaching the border fence and infiltrating into Israel, told the IDF that Hamas stage-managed the border riots to stay in power.

“Hamas organized the demonstrations so that people would not ‘turn’ on them,” he claimed, explaining that the humanitarian situation in Gaza has gotten so bad that Hamas planned out the “March of Return” protests to let people blow off steam, and did it in a way that would get them publicity. A few dead Palestinians, who cares.

Hamas controls everything in the strip. Hamas sends us messages to our Facebook accounts and to our cellphones. They come to mosques handing leaflet saying to go to the fence. When there’s electricity, and televisions can be turned on, all you can see is the march. People got worn down and bored, and I’m one of those people.

The detainee backed Israel’s claim, that Hamas uses women and children as human shields in the riots.

While the IDF has indeed explicitly instructed not to fire at women or children, it has dropped leaflets and in other ways, urged Palestinians to refrain from coming near the fence, saying they are putting themselves in danger by doing so.

Who is really to blame for civilian casualties?

PM Benjamin Netanyahu stressed that sometimes harming civilians is inevitable. “They’re [Hamas] pushing civilians, women, children into the line of fire with the hope of creating casualties,” Netanyahu explained. “We try to minimize casualties. They’re trying to incur casualties in order to put pressure on Israel, which is horrible.”

DM Avigdor Liberman taking part in a Gaza Division situation briefing – together with Chief of Staff Lt. Gen. Gadi Eizenkot and Southern Command Chief Eyal Zamir – said that, “The Hamas leadership are a bunch of cannibals, who treat their children as weapons. They have rockets, personal weapons, and another type of weapon, children and [other] people.”

Their goal is to lift Gaza’s blockade, not to build an economy or hold talks about coexistence, but rather to smuggle weapons [into Gaza] and create a Hezbollah-type model.

Yet, international media coverage has overwhelmingly portrayed the Palestinian “narrative,” blaming Israel, instead of reporting the truth, that Hamas produced this horror show, “Cannibals in Gaza.”

One exception has been the American administration, Nikki Haley has been wonderfully truthful in the UN, pointing out that no other country in the Security Council, would have acted as restrained as Israel.

But unfortunately, people like US Senators Dianne Feinstein and Bernie Sanders, have run to accuse Israel of using excessive force. Sanders has also accused the IDF of killing innocent people. He should check his facts before he runs to condemn Israel.

Bye-the-way, unless you’re an animal rights activist, vegetarian, or PETA supporter, someone who cries out for the suffering of every little one of G-d’s creatures, don’t be a hypocrite, don’t cry for them when we have to kill them, they’re terrorists, and not quite human, they’re cannibals!

Rape, of body and mind