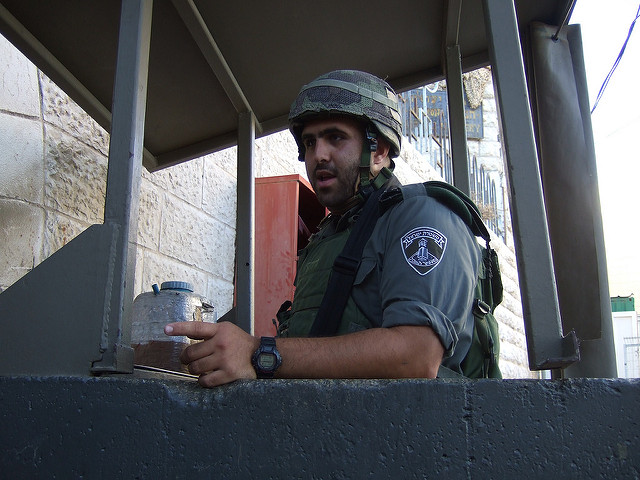 Foreign occupation in the Land of Israel? It conjures up visions of the Maccabean Revolt against the Syrian Greeks, the Jewish Uprising against the Romans, and the modern Hebrew Rebellion against the British. Historically, Jews don’t take kindly to foreign occupiers in their homeland. But since 1994, I’ve been complaining about TIPH, the Temporary International Presence in Hebron, that anti-Israel/pro-Palestinian foreign occupier watchdog group, patrolling in Israel.

Enough is enough! It’s time for the Israeli government to kick them out of the City of Abraham, Issac and Jacob. And, let’s not forget, that Hebron was also David’s capital city, for almost seven years, before Jerusalem. Hebron is the second holiest city in Judaism, after Jerusalem.

But, the threat of invasion from foreign troops or “observers,” continues…

Just recently, UN Secretary-General Antonio Guterres, has spoken about sending armed UN peacekeepers as one of four proposals, for safeguarding so-called Palestinians, that live under “Israeli occupation” in Gaza. First, let me remind you, that Israel withdrew from Gaza in 2005.

He also offered an alternative, “armed forces from a group of like-minded states operating under a United Nations mandate,” (from the 47 Muslim-majority states in the Organization of Islamic Cooperation, for example?). It sounds a lot like a plan for Islamic invasion of the Land of Israel, under UN/international legitimacy.

Gaza, or better, Hamastan, is occupied not by Israel, but an Islamic terrorist organization called Hamas. A parasitic group, that has fed off the misery of the Gazans since 2007.

In response to UNSG Guterres proposal, Israel’s UN Ambassador Danny Danon said, that “the only protection the Palestinian people need is from their own leadership. The Palestinian Authority incites its people to attack Jews, and the terrorist organization Hamas uses the Gazan public as hostages and risks the lives of residents for terror,” explained Danon. “Instead of suggesting ways to protect the Palestinian people from Israel, the UN should instead hold the Palestinian leadership accountable for continually endangering its own people.”

Hamas, is a group that for over fifteen years, has indiscriminately launched rockets, mortars, and missiles, into civilian Israeli cities, towns and villages. And more recently, has flown flammable kites and exploding balloons, wantonly burning crops and starting out-of-control wildfires in Israel.

Israel has the absolute right to Jewish self-defense. If someone doesn’t like it, too bad!

We saw what happened, during the Holocaust, when Jews couldn’t defend themselves. That will never be allowed to happen again. No foreign occupier, be they so-called Palestinians, remnants of the Arab Imperialist Wars of the 7th century, or 20th century Arab colonial settlers in the Land of Israel, can take that right away.

So too, no UN Occupation Troops, “peacekeepers,” or TIPH “observers,” from Italy, Norway, Sweden, Switzerland, and Turkey, should be allowed in the Land of Israel.

Think about it for a moment, Norway, the country that brought Israel, the Oslo fiasco, euphemistically called the “peace process.” Switzerland, international banking center and beneficiary from Holocaust-era dormant Jewish bank accounts. And, Islamist Turkey, well what can be said about Islamist Turkey, rival to Iran for leadership in the region, and vociferously anti-Israel. These countries “observers” patrol, Hebron, the City of the Patriarchs?

In July, during a tour organized by the radical left-wing organization, Breaking the Silence, TIPH personnel visited the Jewish neighborhood of Tel Rumeida, in violation of the TIPH mandate. While there, a Swiss TIPH legal counsel was filmed hitting a young Jewish boy. Afterwards, Switzerland’s ambassador to Israel, Jean-Daniel Ruch, sent an “apology” to the Jewish community of Hebron. But, his letter started off by blaming the settlers, “Though this was no doubt preceded by some provocation on the side of the settlers…” he wrote.

Highhanded abuse from the foreign overlords…

Some days later, MK Shuli Moalem-Refaeli, Chairwoman of the Jewish Home Knesset faction, called on PM Netanyahu to remove TIPH from Israel, after another video was released. In the video, two TIPH “observers” can be seen, one puncturing the tires of a Jewish resident’s car in Hebron, while the second stands guard. The same Swiss “observer” who hit the child was involved.

Moalem-Refaeli said, “This is not the first time that their [TIPH] people have been documented working against the people of the Jewish community in Hebron, and who knows what other injustices were not recorded? Instead of serving as a factor that is supposed to calm the area, they are doing the opposite.” She called the extension of the group’s presence “absurd” and “pointless.”

In fact, TIPH was never meant to be neutral, but pro-Palestinian.

Even Karin Aggestam, who served with TIPH in the year 2000, admitted in her groundbreaking analysis, published in the Cambridge Review of International Affairs (2001), that TIPH is not expected to be neutral. Since its mandate is to monitor the welfare of the Palestinian residents of Hebron in recognition of

the existing asymmetry between Israelis and Palestinians. Israeli authorities and particularly Israeli settlers, who have never accepted TIPH’s presence, have frequently accused TIPH of having a Palestinian bias. The Palestinian civilian population often feel frustrated at TIPH’s practice of observing rather than actively intervening.

Well, now we know with video evidence, that last statement is patently false. TIPH does actively intervene for the Arabs, as Jewish residents of Hebron have been complaining about for years.

The TIPH mandate was originally set-up under a left-wing Rabin government, it’s renewed every three months by agreement of the State of Israel, and first with the PLO, then later the Palestinian Authority.

But why would a right-wing Netanyahu-led government continue to extend their mandate?

It could easily be dissolved. It’s about time, enough is enough.

First came TIPH, they were called “observers,” and who protested? Then came armed UN troops, and they were called “peacekeepers.” Again silence. Finally, a Muslim-led internationally sanctioned expeditionary force came to invade the Land of Israel…

Time to fight back, before it’s too late. Say no to foreign occupation in the Land of Israel!