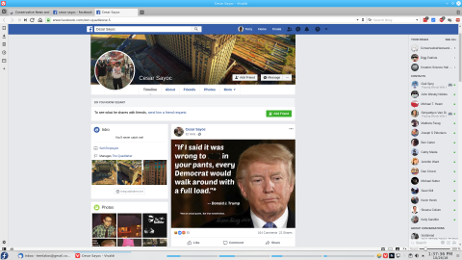 This morning (27 October, 11:30 a.m. ET) the FBI announced the arrest of one Cesar Sayoc. The FBI suspect him of having built and sent thirteen pipe bombs to various critics of Donald Trump. The takedown of on-line accounts allegedly belonging to him has already begun. (Facebook took down the account of a “Cesar Sayoc” five minutes after CNAV took a screenshot of it.) But serious questions remain about his identity and whether he acted alone.

Who got the bombs?

As of this hour (2:42 p.m. ET), the Secret Service and other LEAs have intercepted or recovered thirteen pipe bombs. The target list reads like a Who’s Who of the Deep State and its sympathizers. Here is the full target list, as far as CNAV can determine:

Who was not a target

Tellingly, Senator Bernie Sanders (I-Vt.) and Candidate Alexandria Ocasio-Cortez (D-N.Y.) received no such package. Governor Andrew Cuomo (D-N.Y.) earlier said he had gotten one of the bombs. But the “package” he got turned out to hold a flash drive. That drive held information about a group (The Proud Boys) that have earned the governor’s enmity by their support of President Trump.

At this time, the FBI has taken possession of all the pipe bombs. At a press conference this afternoon, FBI Director Christopher Wray confirmed this. He also said they had low-grade explosive. From the description he gave, this sort of explosive appears in ICC Class C common fireworks. Authorities warn that other packages might still be in transit.

Those same authorities have charged Cesar Sayoc with making and sending the bombs. Cesar Sayoc (if it was he) made them from PVC pipe. He filled these with “energetic material” that he could have taken from common fireworks. To each he attached a digital timer—on the outside of the pipe. Each package carried first-class postage—in one case, insufficient postage. Postmarks did not appear on all the packages. (CNN said the one addressed to Mr. Brennan, in care of them, arrived by courier.)

Cesar Sayoc owns a white work van, which he (or someone else) festooned with pro-Trump and anti-media stickers. These stickers cover all the side and rear-view windows. Someone placed them neatly and precisely to fill the windows exactly.

In sharp contrast to this artistic precision, a Navy bomb disposal expert scoffed at the “amateurish” construction of the bombs.

A few observations from a former bomb disposal officer (i.e. Me):

4. "Hoax Devices" are FAR more common than real ones. In which case, we should ask ourselves what the motives of the "bomber" are and "who benefits?"

Go ahead. Think deeply and critically.

Among other things, Thomas B. Sauer called attention to wires sticking out of both ends. He also pointed out the perpetrator placed the bomb clocks outside the pipes, not inside.

Law enforcement identified Cesar Sayoc in record time, probably by reason of his own carelessness. He left a latent fingerprint on one pipe bomb. Worse yet, Cesar Sayoc already has an arrest record, for offenses varying from shoplifting to another instance of bomb-making. At least one report suggests he left some of his DNA on one package.

This report might or might not reflect on the further carelessness of Cesar Sayoc. National Review reported yesterday the powder in the John Brennan bomb was harmless. Director Wray would not agree with that assessment today. Or would he? No one asked him about this earlier report. They took his word that the FBI laboratory in Quantico, Virginia now has all the bombs. And they must have assumed that all the bombs could have exploded under the right conditions.

Cesar Sayoc and his on-line presence

An anonymous law-enforcement source gives the suspect’s full name as Cesar Altieri Sayoc. A “Cesar Sayoc” had a Facebook account until today. CNAV took a screenshot of it. Five minutes later, CNAV couldn’t find the account. CNAV assumes Facebook took it down.

Two Twitter accounts exist (at the time of this writing) that seem traceable to Cesar Sayoc. They are:

The “HardRock” in the two names looks like a reference to the Hard Rock Cafe chain. The profile cover pictures for the two accounts look the same. The one for hardrock2016 looks blurry; the other is in sharper focus.

Authorities list the address of Cesar Sayoc as Aventura, Florida. But the two Twitter accounts have different Florida town names.

Questions about Cesar Sayoc and his accounts 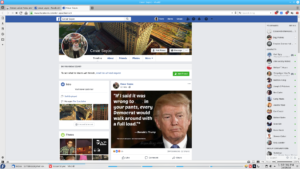 The Twitter feeds remain, and they depict a man given to conspiracy theories of all kinds. He seems to have paid particular attention to the Chemtrails allegation. According to this, the Air Force has been seeding clouds with “carbon black” and other chemicals. The aim, the theory states, is to mimic volcanic eruptions and reflect the sun’s rays, to “cool” the earth.

Two posts on a Cesar Sayoc Twitter account about chemtrails. The original photos could be ballast for flight test of a passenger airliner.

Two more posts on a Cesar Sayoc Twitter account about chemtrails, including a drawing of an old turboprop airplane.

Infographic on a Cesar Sayoc tweet about alleged purpose of chemtrails

Photo from a Cesar Sayoc tweet about carbon black used in “chemtrails.”

Did Cesar Sayoc act alone, or in concert?

Two facts about the pipe bombs raise questions about what Cesar Sayoc truly intended. First, the timing of the bombs could not be more suspect. Until the arrest of Sayoc, prominent Democrats and sympathetic commentators cited President Trump as the inspirator, if not the instigator, of the plot. Likewise, with this arrest, the scare will fade—maybe too soon to “flip” the election.

Second, not one of the pipe bombs exploded. Furthermore, Cesar Sayoc seems to have made elementary mistakes. Theses mistakes go beyond the design of the bombs. Authorities somehow intercepted all these potential Reichstagsbranden (Reichstag fires) before they could harm anyone. CNAV might have been able to accept one such homemade failure. But thirteen or more in the space of a week, violate the Law of Averages.

More tellingly, Cesar Sayoc got the address of one target wrong, and sent other bombs by routes virtually guaranteeing their interception. No protectee of the Secret Service ever receives mail directly from another person. The Secret Service redirects all their mail to their own offices. They then inspect it before they pass it on. So this plot never actually endangered Obama, Biden, or Clinton. Nor did it endanger George Soros. Cesar Sayoc should have known that Soros has a private army at least as good as, if not better than, the Secret Service.

Also, why did Sayoc, after taking such exquisite care to decorate his van, build his bombs with elementary design errors?

From the beginning, this case had all the hallmarks of a false-flag pseudo-operation. Thirteen pipe bombs not only fail to explode but don’t all reach their targets. Listing Debbie Wasserman-Schultz as a return addressee means nothing. One intending harm would list a friend as a return addressee to gain the confidence of the target. Still, even if any of the bombs had exploded, they were not likely to kill anyone. True enough, most authorities no longer allow homeowners to stage their own fireworks shows on Independence Day, for example. People have blown off fingers by letting “ladyfingers” explode while holding them. Amateur model rocket “engineers” have occasionally killed themselves or others after mixing their own fuels. But Cesar Sayoc used strictly low-grade explosives. None of these was going to blow a hole in the wall, or harm more than one person.

Again, thirteen low-grade bombs all fail to explode and mostly fail to reach their targets. For CNN to evacuate their premises (twice) seems to have dramatic effect, more than workplace safety, as the goal.

So perhaps Cesar Sayoc was a hopelessly careless and ignorant amateur. Or someone recruited him, groomed him, decorated his van, then sent him out to get his fifteen minutes of fame. (Apologies to Andy Warhol.) He seems to have been a willing recruit and an easy dupe. His record shows that one wanting a patsy would have had no trouble finding him.

But that’s the problem. This case is too neat to take at face value. How convenient that he registered as a Republican in time to vote in the 2016 election. How convenient also that he set up one of his Twitter accounts that spring. And who updated his Facebook account at 1:05 p.m. ET on the day of his arrest? Authorities arrested him at 11:30 a.m. ET.

In the next days, the USPS and Secret Service will likely intercept a few more packages. The FBI might not release many more details before the trial. (Good law-enforcement agencies rarely release such evidence to the public.) Cesar Sayoc will face trial, though well after the election.

In any case, the amateurish nature of the bombs, the complete success in intercepting them, and in one case a lack of proper addressing, all raised the false-flag suspicion long before the arrest. (A former FBI profiler agrees.) So the targets will likely draw suspicion, not sympathy, from this episode.

Created Opposition Will Be Blamed – But They Are The Ones Doing The Attacking!