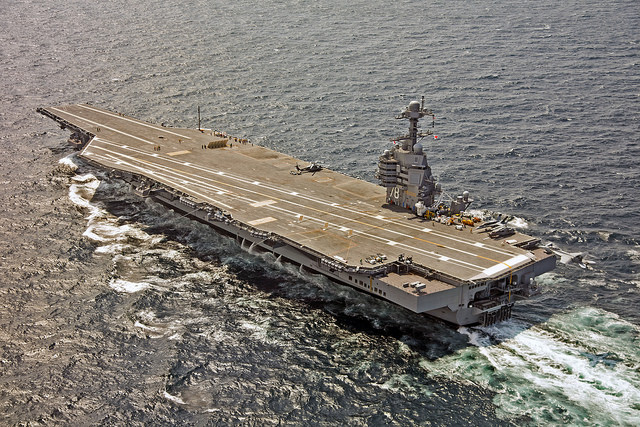 Hello, this is Darrell Castle with today’s Castle Report. Today I will be talking about the role of the United States Navy in the world since World War Two and some things being done by other nations to counter that role today. First, let me remind you that next week is Thanksgiving Day and I plan to spend that Day with my family, so no Castle Report next week.

Two ways to get things: seize or trade for them

All nations need goods and services that can only be obtained from other countries. Sometimes they need raw materials for manufacturing industries, sometimes they need the already manufactured products, and sometimes their merchants just want to profit from the purchase and resale of foreign goods. There are only two ways for nations to obtain what they need from foreign countries:

The best example of a nation choosing the war option is probably Japan in the 1920’s, 1930’s, and 1940’s. Japan had virtually no natural resources at all and had to import everything necessary to fuel its rapidly expanding Pacific Empire. It obtained the material it needed by invading and conquering one nation after another, and taking the resources of the conquered nations by force. Japan’s militaristic quest to expand its empire led directly to the start of World War Two because the only thing standing between Japan’s total conquest and subjugation of the Pacific Region was the United States Navy so that Navy had to be eliminated as a threat.

Most people would argue then that the United States entry into World War Two was after the Japanese attack against the United States Navy at Pearl Harbor in December of 1941. A good argument could be made for the premise that the United States entered the conflict with Japan when President Roosevelt decided to curb Japan’s expansion and its conquest of China and brutal treatment of Chinese and other subjugated people by imposing economic sanctions on Japan. In December 1937, the Japanese army entered Nanking China which was then a capital city. The treatment of the Chinese people in Nanking was so brutal that the civilized nations of the world were shocked by it.

The League of Nations fails

The League of Nations held an emergency meeting to discuss the crises and it ordered Japan to leave China immediately. The Japanese ambassador to the League rejected the League’s decision and walked out of the meeting and the League. The United States was not a member of the League but President Roosevelt was offended by Japan’s action as well, and he tried to get the European Powers, such as Great Britain and France, to join him in imposing economic sanctions on Japan but they were preoccupied with Germany and would not stand united with him.

President Roosevelt decided to act unilaterally and imposed a ban on crude oil exports to Japan. Later he expanded the ban to include iron ore and steel and these put Japan in a real bind. This was an example of a nation attempting to force a change in behavior of another nation through means that fall short of war. Some argue that economic sanctions are an act of war and I tend to fall into that category, but in this case something had to be done about the suffering of the Chinese people under Japanese occupation, and President Roosevelt did what he felt had to be done.

The United States Navy steps in

Many argue that Roosevelt was just trying to force a Japanese attack to justify entering the War on behalf of European interests. I have read the books that make that argument and it is a tempting one, but I do not believe it to be true. One thing is for sure though; those sanctions put a bull’s eye on the United States Navy. The U.S. Navy was the only thing standing between Japan and its complete conquest of the Pacific region of the world.

The task of preventing a repeat of Japan’s behavior has been the United States Navy’s task in the years since World War Two. To make sure that no nation would be able to choose the war option to obtain the goods it needs from foreign nations was the task for which the modern US Navy was built. The striking power of the U,S, Navy is so overwhelming that nations build themselves into penury trying to match it. The Chinese have done a fair job of building a blue water fleet through espionage and cyber-espionage against American high tech companies, but they have a very long way to go.

It is the United States Navy that allows the United States to impose economic sanctions on other nations in an effort to bend them to the President’s will. It is also the United States’ control of the world financial system and the world reserve currency that forces other nations to do its bidding. The Navy patrols the sea lanes of the world and keeps them open with the obvious threat of force. Two good examples of this concept existing right now would be the Navy’s anti-piracy campaign in the Indian Ocean, and the Gulf of Aden, which is the chokepoint guarding the Red Sea and the Suez Canal.

The other example would be the Chinese claims to certain waters in the Pacific region and the U.S. Navy constantly patrolling there to demonstrate that the sea lanes are open to all. The enforcement of international trade by peaceful means also insures the continuation of the U.S. dominated world financial system and the dollar denominated system of international exchange, which is currently the only way nations can trade with each other.

An attempt to reopen the Silk Road

For decades the nations of the world which do not submit easily to the US system, i.e. China, Russia, Iran, other Middle East nations, and to some extent India, have dreamed of a way to escape from the dollar system and ways to avoid the U.S. Navy while doing it. The best way to avoid the U.S. Navy would be to travel overland or by some combination of land and sea, and that is exactly what is happening.

The old silk roads from ancient days moved goods by camel caravan from the Middle East to what was then called the Orient and all the way to Europe, selling merchandise at various villages along the way. The silk and exotic spices from the Orient gave this system the name “Silk Road”. The New Silk Road will move goods by rail and other overland transport from the Far East across the Middle East, across China, across Russia and Siberia into Europe. India and Africa can easily be included in the system with northbound lines and some very short shipping lanes.

For example, the sanctions imposed by President Trump against Iran could be avoided by use of the New Silk Road to ship Iranian oil to Europe, India, and China. The U.S. Navy is charged with enforcing the sanctions and, keeping the Iranian navy bottled up in the Persian Gulf. In order to defeat the sanctions by use of the New Silk Road, Iran would have to find willing trade partners who will risk being shut out of the dollar-denominated world financial system. That would be very possible if these nations were able to develop a new gold-backed, outside the dollar system. Perhaps a gold-backed bitcoin or other crypto-currency system could be developed as an alternative. Is such a thing even possible? I don’t know, but I’ll bet that it is.

This project is apparently being funded by China, which is sinking trillions into it. I suppose that’s money obtained through the purchase of U.S. debt and through massive trade deficits with the United States. When this project is completely finished, it will allow the nations of the world to trade outside the dollar system and to move their goods outside the reach of the U.S. Navy. These ideas do not bode well for the future of a nation addicted to credit and mired down with unpayable debt.

Will the United States be content to sit idly by and watch all this happen? I doubt it because I at least imagine that many of the things we see happening in the world today have to do with building road blocks on the New Silk Road. Things, such as the rise of ISIS in Syria, could be designed to block the roads path across Syria and up through Turkey. The regime change in Ukraine and the continual conflict there could be a road block to the passage across Ukraine. What about the continual agitation against Russia, and the continual saber rattling, and continual charges against Russia. Could any or all of these things be orchestrated attempts to block or at least slow down the New Silk Road?

Role of the banks

Many banks see what they think is the handwriting on the wall and are starting to take action in reliance. A lot of money is riding on the success of this new land route between China and Europe. China is already Germany’s number one trading partner, and the new Road will widen the gap between China and Europe’s other trading partners. China created the Asia Infrastructure Investment Bank to help finance the New Silk Road project, and Chinese Premier Xi Jinping has been traveling around the world selling it.

Everybody seems to want to jump on board the New Silk Road train except those in North America and it’s easy to see why. The Asia Development Bank (ADB) now says “the future will be Asian. The future will be Asian, and North America will have to give up its leadership in the world economy.” So far the bank says $340 billion U.S .dollars have been spent on the project with about 8 trillion to follow. That’s twice the annual GDP of Germany so we will see if it turns out to be possible.

We will also see whether the United States, charged with enforcing peaceful trade among nations for the last 73 years, will be willing to go to war on some real crises or some pretense in order to protect its control of world finance and world trade.

Remember folks give thanks next week and spend Thanksgiving with your family. I will talk to you again, God willing, on Friday November 30, 2018

If I Can Demoralize You, I Can Control You! Pornography: The Break Down of America’s Virtue