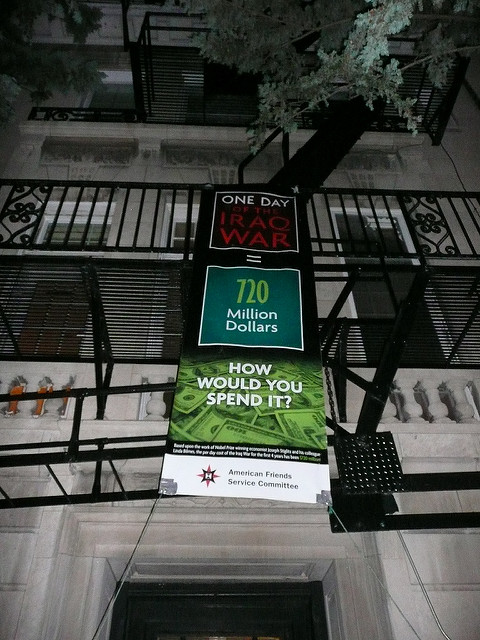 Claiming to work for “peace and social justice,” in the US and around the world, American Friends Service Committee (AFSC) has, nevertheless, been rightly called “the most militant and aggressive of Christian anti-Israel groups.” They boast of their history of non-violent activism, yet work to ultimately destroy the Jewish people and their ancient homeland, Israel, by inciting others to strive for Israel’s annihilation, often through violence.

Origins of the Friends

The AFSC is a Quaker group.1 Together with a British Quaker organization, it began in 1917 as a wartime medical corps to assist civilian victims of World War I, aiding orphans and victims of famine and disease. Their additional humanitarian work through Europe, Japan, India and China, helping African-, Native-, Mexican-, and Asian-Americans, certainly earned them the Nobel Peace Prize.

Yet, in the 1930s and through World War II, they helped non-religious Jews and Jews married to Christians, alleging that “religious Jews” were being helped by other organizations. But they did not decline to help Catholics, Protestants, Buddhists, Hindus and Muslims based on the extent of their religiosity. Therefore, despite the dire conditions of the Holocaust survivors – their suffering, losses, homes destroyed, and eagerness for peace in their ancient homeland – the organization instead promoted the repatriation of hostile Arabs into Israel, the Arabs who were eager and ready to attack the reborn Jewish state and implement their plans of genocide. There can be no other interpretation but organizational antisemitism.

Today, the Friends have gathered some unexpected friends, some even from the Jewish community. The controversial Rabbi Brant Rosen and other leftists have merged with the Quakers in an endeavor to devastate Israel’s economic survival. United by anti-Zionism, the two religiously identified communities joined the Palestinians in a stealth, or civilizational, operation of jihad, a subtle war strategy to seriously harm Israel’s economy.

For the cause of Arab settlement in the land, the AFSC adopted Hamas’s revised history, falsely claiming that these Arabs are indigenous “Palestinians,” whose return is justified. This is beyond absurd. Historically, the Romans named the land mass Syria Palaestina to insult the Jewish inhabitants (~135 – 390 AD); it was never ruled by “Palestinians.” Prof. Philip Hitti, leading Arab-American historian, firmly testified in 1946, “There is no such thing as ‘Palestine’ in history; absolutely not.” Archaeological findings repeatedly unearth artifacts to verify centuries of Jewish history.

Arabs want it all

By 1921, the British Government, under the Palestine Mandate, tore away nearly four-fifths of the geographical territory (~35,000 sq. mi.) to create the new Transjordan, leaving a mere 20 percent for Jewish settlement in their ancestral, Biblical birthplace. Yet the Arabs objected. In 1948, having again rejected a larger slice of land for peace, the Arabs invaded and lost its aggressive war to the newly established State of Israel. The 1967 Six-Day War was yet another Israeli victory against the Arabs’ genocidal attacks, yet Israel offered to return 90% of the territories won in the interest of peace. Israel has since returned all of Sinai to Egypt and, despite immense historical and Biblical Jewish ties, relinquished Gaza. There is still no peace.

The land that had never been autonomous became Israel’s by virtue of winning defensive wars. Therefore, “occupied” is a misnomer created to evoke Arab victimhood in the court of public opinion. “Settlements” is another falsity because Israel’s constructions are legal under the League of Nations Mandate for Palestine, yet the AFSC has deliberately taken the opposing position. UN Security Council Resolution 242 gave Israel the right to administer the territories gained in her self-protective war until peace is achieved, but the Arabs remain hostile and threatening, burning huge swaths of land and attacking Israeli citizens as they do in much of Europe, which is also under siege.

The Arabs who accepted Israel’s offer for them to remain in Israel with full citizenship in 1948 are thriving, along with their progeny, under conditions that greatly surpass life in Arab lands, but the Arabs who fled Israel for Gaza, following their armies’ instructions, were abandoned and have become an inhumane bargaining chip in the hoped-for conquest of Israel.

While Rosen expressed indignation at Israel’s ban upon their entering the country, denying the AFSC’s increased international outreach and spread of damaging propaganda about Israel, many Jews in the Diaspora wonder why Israel’s Strategic Affairs Ministry did not legislate the entry ban sooner.

American Friends Service Committee is but one of Israel’s American-based adversaries that have been banned from entry. Others include American Muslims for Palestine, Code Pink, Jewish Voice for Peace, National Students for Justice in Palestine, and US Campaign for Palestinian Rights who also seek to obliterate America’s solid ally, Israel, which does much to benefit America, including providing valuable intel, technological and medical innovation, and much more.

Another destructive group, Israeli Committee Against House Demolitions (ICAHD), headquartered in the US, with branches in the UK and Norway, opposes every method of reprisal employed by Israel against her warring neighbors, which translates to a prohibition on all means of self-defense. The Committee continually advances the false narratives of “occupation” and “Palestinian territories,” and one of its founders, Jeff Halper, another blighted Jewish surname, seeks to merge a Palestinian entity with Israel, virtually ensuring Israel’s obliteration.

The ICAHD uses non-violent propaganda, books, films, and tours conducted to the territories to provide scenes of supposed Palestinian victimization (although Hamas rules Gaza). However, as is the practice in any sovereign nation, it is Israeli law to demolish homes that do not conform to the legal principles of zoning and building laws on land that may be dedicated to parks and preserves, or that lacks the necessary infrastructure to support housing for anyone, including nomadic Bedouins with their camel livestock. Furthermore, consider that the UN purposely and illegally builds on land with historical significance to Israel.

It is also Israeli law to bulldoze the homes of families that spawn the jihadi terrorists who murder Jewish citizens, disciplinary demolition that is a proven deterrent. Israel is now considering a law for the expulsion of the killers’ families. Not only has Halper engaged in protesting the homes’ destruction, but he has had them rebuilt, defying the law and reason. In 2005, he and ICAHD began a campaign to boycott Israel as an “apartheid” state until the “occupation is over,” and supported the 2010 “Freedom Flotilla” (such as Mavi Marmara), its purpose being to break Israel’s legal defensive blockade.

As Arab leadership intentionally abjures negotiations for peace and pursues violence, the BDS movement works its psychological warfare against Israel with the buzz words, “occupation” and “colonialization,” both inapplicable in areas that were never self-governed by any but Israel. BDS is meant to sculpt a Palestinian tie to the land and economically, socially, religiously, and intellectually malign Israel as the oppressor, so that the world will compliantly accept Israel’s extinction. (Note: this is one of many methods of making other countries Islam-compliant.)

For seventy years, in defiance of international law, the so-called Friends have been working to remove Jewish sovereignty from the land. Its nonviolence is nevertheless an aspect of jihad, closing individual businesses (some employing Arabs) and obstructing international trade, costing Israel hundreds of millions of dollars and human treasure to counter the delegitimization. The BDS movement aspires for Israel to be impoverished and weakened enough for the Palestinians to complete their conquest by the sword.

Another facet is to decry Israel’s legal wall construction that has saved thousands of innocent Jewish lives from the Palestinians’ invasive, brutal attacks. (The same mentality condemns a wall at America’s southern border.) The Quakers and other anti-Zionists also seek voting and other rights for “Palestinians” who originated from neighboring Arab countries and are not Israeli citizens, and a “right of return” for those who refused Israeli citizenship but who constitute a flood of warriors ready for invasion and conquest.

We recognize and condemn the hypocrisy of these Quakers and their collaborators who conspire for the acquisition of Israel that is a mere one-thousandth the size of the Muslim land mass, and the genocide of the Jewish people, while hiding behind the virtuous guise of “non-violence.” Make no mistake: their success in Israel would free them to increase their efforts in Europe and the Americas. Perhaps, within this organization, there may still be some with the conscience to condemn the hypocrites, rebel against the leadership, call for justice, and reverse the odious boycott?

1Quakers have always officially called themselves “The Society of Friends of the Truth.” – Ed.