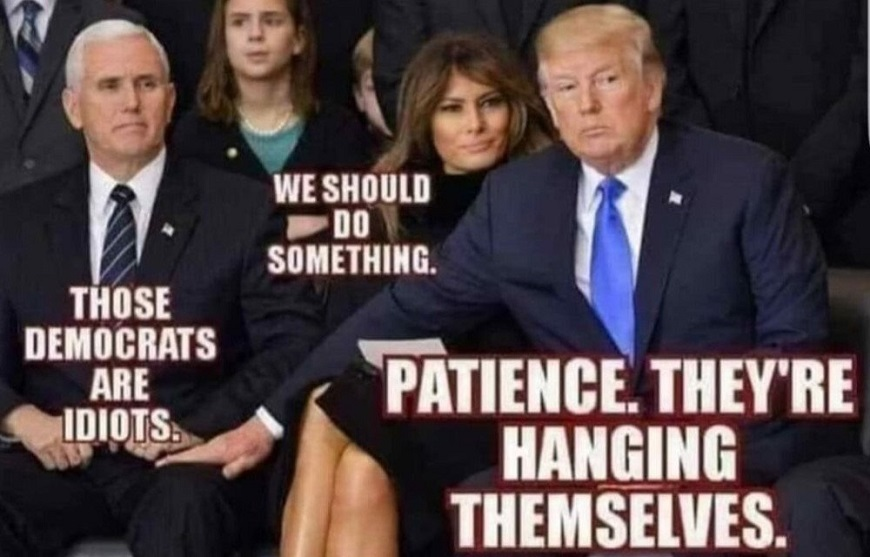 For the past 50 or more years, the Democrat Party—always leftwing but today both viciously anti-American and virulently anti-Semitic—has worked tirelessly to inflict its worldview on everyone in America.

It stealthily infiltrated our media, our schools (from pre-school to universities), and since Obama our Intelligence Services and Military. By so doing, the Democrat Party sought to convince our electorate that:

No one has spelled out the devolution of the Democrat Party and the key players responsible for its demise more comprehensively than writer Shari Goodman—read her entire article here!

Since the election of 2016, when business mogul Donald J. Trump outsmarted 20 Republican opponents, all career politicians, and trounced Hillary in the Electoral College to win the presidency, Democrats seem to have contracted a mutating virus a thousand times worse than Covid-19.

The anti-Trump symptoms are identical in all of those “tolerant” Regressives:

Of course the real reason for this systemic derangement is that President Trump convincingly exposed the deep criminality of Big Government and the cozy arrangements that cost the American taxpayer billions of dollars each year. To wit:

And the winners are…!

Candidates Biden and Kalamity are telling the American public that they—not President Trump—will bring America to its best days yet. Yet they admit they will:

And, according to Sundance, Joe Biden opposes:

Given all these economy-killing policies, the delusional Biden-Kalamity ticket continues to assure us every day that we should trust them to invigorate the economy and boost employment.

Certainly not the Black community which has enjoyed the highest employment in American history under President Trump!

Nor the Blacks who went to prison with disproportionately harsh sentences, but thanks to President Trump’s “First Step” program have gone free to enjoy gainful employment and their cherished freedom. By the way, where was the Obama-Biden tag team for eight years in bringing such life-enhancing legislation about?

Certainly not the Hispanic community which has also enjoyed record employment under President Trump’s policies.

Nor women who have enjoyed record employment under President Trump’s policies.

Certainly not the youth of our country who have enjoyed record employment under President Trump’s policies.

Think about it. Since Donald Trump and his gorgeous wife Melania came down the escalator in Trump Tower in June of 2015, every leftist pundit, commentator, TV anchor, sophisticated scribe and Hollywood ditzoid predicted—with amazing confidence and self-important arrogance—that “Donald Trump will not be President of the United States.” Here is my favorite clip of those always-wrong know-nothings.

Today, about six weeks from the election, all those brilliant Democrats—you know, the ones with the fancy college degrees, the impressive credentials, the high IQs, the decades in government service at the highest levels—are the same leftists who:

That’s a lot of failure. But it hasn’t stopped the Democrats from continuing to fail.

While President Trump is busy bringing about unprecedented breakthroughs in forging alliances between Israel and the United Arab Emirates, Serbia and Kosovo, and now Israel and Bahrain—for which he has rightfully earned not one but two nominations for the Nobel Peace Prize—Democrats once again prove their idiocy by admitting that they loved when the arch-terrorist Yasir Arafat received the prize and when Barack Obama received it for….um…what???—but all of a sudden, they hate the Nobel Prize.

Now desperate, the Democrats trot out an article in the far-left Atlantic magazine that alleges that the president called American World War I veterans who died in France “suckers” and “losers.” This canard was an accusation not one person in America believes, given the president’s unequaled respect for and largesse to our military, including the massive build-up of the U.S. Military that the Obama-Biden regime eviscerated, emasculated, and tore down at every opportunity.

Where did this poison dart go? Another failure.

The next day, the same now-panicked leftists trotted out the “breaking,” “explosive,” and also go-nowhere revelation that Bob Woodward, the reporter for the fanatically anti-Trump Washington Post, revealed in his new book, Rage, that President Trump, gasp, didn’t want to panic the public and so played down the potentially dire information he was receiving about the China virus, Covid-19.

Imagine going to a doctor or bringing your child to a doctor, only to have that medical professional enter the room and tell you, “This is bad, very bad.” A sane person would call this doctor an alarmist and walk out of the room. Such lack of empathy, lack of optimism, and failure to suggest a plan of action would outrage anyone.

President Trump, on the other hand, demonstrated:

All things that Doomsday Democrats hate!

We don’t believe you this time, Woodward!

Unfortunately for Woodward and his boss Jeff Bezos, this poison dart also failed. Because the American public that leftists hold in such contempt have eyes and ears and see for themselves what the president did to protect them, including:

No doubt, these frantic, Democrats will keep up the anti-Trump drumbeat until Election Day on November 3rd. Watch them fabricate explosive headlines, level damning accusations, and work overtime to rig the election.

But this effort will earn them a Z for zero success. That is because I suspect that most Democrats are not that dumb. So that when they get into the voting booth and draw the curtain, and even when they fill out the mail-in voter forms, they will pull the lever or check the box for the man who promises—and has already delivered—peace and prosperity.

Related Topics:politicianspresidential election
Up Next

While Pedophile Faces Death By Firing Squad For Molesting Children In Indonesia, California Passes Bill To Reduce Penalties For Sex With “Willing Children”

Color revolutions are not about color