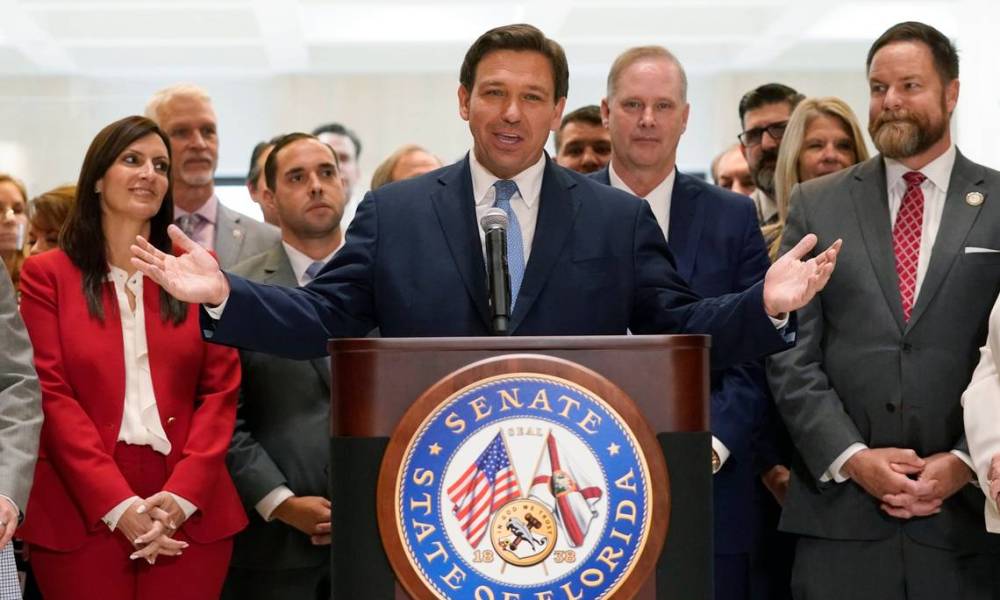 In response to mandates issued by President Biden’s administration, the Florida legislature passed a series of bills restricting the federal government’s ability to enforce the vaccine and mask mandates.

The bills were passed mostly along party lines Wednesday during a special session called by Gov. Ron DeSantis to discuss the joint legislation agenda titled “Keep Florida Free” that will now be sent to the governor’s desk to be signed into law.

“We have passed the smartest, strongest legislation in America to combat the Biden administration’s unlawful vaccine mandate,” Senate Speaker Chris Sprowls said in a statement upon the agenda’s passing. “The result of this week’s work is simple: No one who is subject to Florida law will be forced to get a vaccine who does not want one.”

The series of four bills passed by the Florida House and Senate prohibit COVID-19 vaccination mandates for government and public education employees as well as for private businesses. It prohibits mask mandates in public schools and protects unvaccinated employees from losing their jobs to federal mandates.

It also repeals the surgeon general’s authority to mandate vaccinations. The laws were introduced in direct response to Biden mandating federal employees, employees of private businesses with a workforce of at least 100 people and medical professionals at Medicare and Medicaid facilities be fully vaccinated.

The passing of the bills follows an appeals court of Friday extending a hold on Biden’s vaccine-or-test mandate for private businesses. The White House has said the vaccine mandates aim to ensure that about 100 million U.S. workers are vaccinated in order to save lives.

“Today, we are sending a clear message that Florida stands for Freedom,” Senate President Wilton Simpson said. “We will not allow the Biden administration to make political pawns of the very people who put their lives on the line to keep our economy running while everyone else was safe at home, and we will never cede the responsibility of parenting to the school system or bureaucrats in the federal government” [UPI].

I applaud Florida for any and all attempts to protect its citizens and businesses against oppressive federal overreach. Senate Speaker Chris Sprowls gets it right when he calls the Biden administration’s vaccine mandate “unlawful.” However, therein lies my complaint and the trap the right so often falls into. If the mandate is actually unlawful (which it is), then no new law at the state level is necessary to protect Floridians against it. The proper course of action would be a resolution passed by the legislature, and/or declaration by the governor, stating the simple fact that:

“Because all legislative authority is vested in Congress, neither mandates by the president nor rules imposed by executive branch agencies bear the force of law. The vaccine mandate is therefore moot and none binding on Floridians and businesses operating within the state. The state of Florida will employ the use of its state police, and if necessary, national guard to protect businesses against federal agents seeking to impose the mandate and/or fines related to the mandate. Any businesses choosing to compel employees to be vaccinated will open themselves to civil suit by their employees against which the state of Florida will provide no protection to such businesses.”

I am concerned that when the political right resorts to passing new laws to stop the effect of unlawful orders that are not law, we give those orders the appearance of having the force of law.

There’s just one thing: you could almost argue the same way if all you’re willing to do is to go to court. True, the AG of Florida could (and, I assume, did) go straight to the Court of Appeals for the Eleventh Judicial Circuit, according to the Emergency Temporary Standards authorizing statute. But would you accept that statute as legitimate? And what would you (in the place of the Florida AG) do if the three-judge panel voted against you, and you couldn’t even get relief after an en banc hearing or kicking it up to the Supreme Court? Governor DeSantis’ new laws remind me of the Nullification Statutes of 1832 (see Dowdey C, The History of the Confederacy, 1832-1865). Here Gov. DeSantis is saying, in effect, and to paraphrase President Andrew Jackson, “The Court has made its decision. Now let it enforce it.”

Your proposed joint resolution, with a signature from the governor, takes the form of a law. And a new law is the one thing that can grant standing, in the courts of the State of Florida, to a lawful resident of Florida to sue an employer who discharges or otherwise discriminates against him by reason of a vaccine mandate, be it federal, local, or even private to the employer himself.

In addition to which I’ll add one thing that the Governor did not do, and ought to do. He ought to instruct his Secretary of Health – or the Florida Surgeon General, if there is such an officer, or the equivalent of one – to lay on his/her/its own investigation of SARS-CoV-2 and the so-called vaccines and prepare to issue a definitive finding that these preparations are dangerous, countereffective (counter to the advertised purpose, that is), and therefore “deadly preparations” within the meaning of Point Three of the Oath of Hippocrates, and unlawful to administer, “even if asked,” or to recommend.