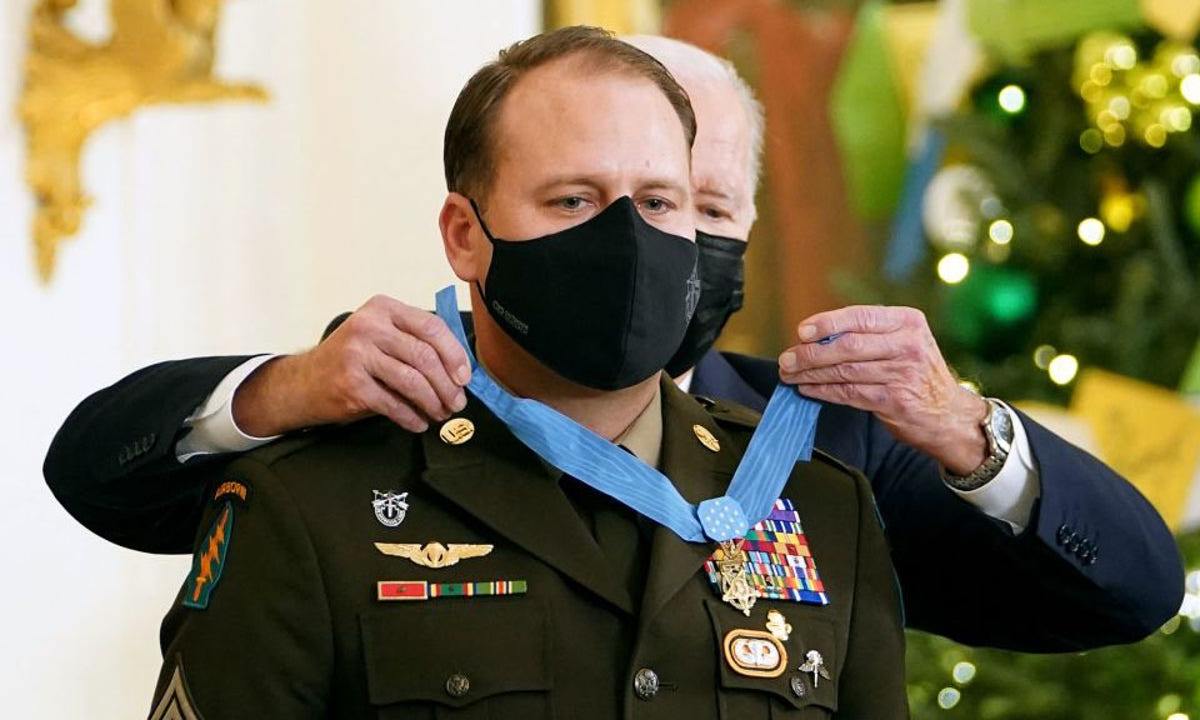 On Thursday, President Joe Biden awarded the Medal of Honor to three men who fought in Afghanistan. Two of the medals were awarded posthumously as one of the soldiers had been killed in Iraq, another was killed in Afghanistan.

Biden placed the medal on Master Sgt. Earl Plumlee himself, as Sergeant 1st Class Christopher Celiz and Sergeant 1st Class Alwyn Cashe were awarded after their passing. “Our hearts are overflowing with gratitude today as we honor the unparalleled courage and commitment to duty,” Biden said about the three medal recipients.

Cashe was killed after rescuing comrades from a burning Bradley Fighting Vehicle in Iraq, and Celize died after using his body to protect a helicopter evacuating soldiers after a firefight. The president described Cashe, who grew up in Oviedo, Florida, as “a soldier’s soldier, who literally walked through fire for his troops.”

Cashe is the first black soldier to be awarded the Medal of Honor since the Vietnam War. He sustained severe second and third degree burns covering most of his body, yet, as the White House said, he “persevered through the pain to encourage his fellow Soldiers and ensure they received needed medical care.” Cashe refused evacuation until his wounded teammates were evacuated.

Celiz, from South Carolina, died from his injuries in July 2018, and Biden said he was “courage made flesh.” He was hit by enemy fire while helping evacuate a casualty on an aircraft. The White House wrote, “His selfless actions saved the life of the evacuated partnered force member and almost certainly prevented further casualties among other members of his team and aircrew.”

Plumlee was awarded the medal for his response to an attack in August 2013 in Afghanistan, and before placing the medal on Plumlee, Biden said the recognition “has been too long in coming.” In Afghanistan, he took on insurgents armed with suicide vests and throwing grenades.

The White House described his actions, saying, “The insurgent detonated his suicide vest, mortally wounding a U.S. Soldier. Staff Sergeant Plumlee, with complete disregard for his own safety, ran to the wounded Soldier, carried him to safety, and rendered first aid.” Plumlee is still in the Army Special Forces.