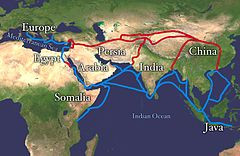 These notes on the Silk Road exhibit at the Cleveland Museum of Natural History continue with a discussion of glass and ceramics. Again the exhibit gives a false impression: that glassmaking and pottery began, or at least were most closely associated, with Islam.

Glass and ceramics along the Silk Road

FROM WEST TO EAST

Bottle: The Chinese artist who made this porcelain vase borrowed a shape from imported Islamic glassware.

Green Vase: Markets of the Middle East did a brisk business selling Chinese ceramics colored with the pale green glaze known as celadon.

Bowl: In the 1100s, Islamic craftsmen developed a fine-textured clay by mixing crushed quartz with small amounts of ground-up glaze and natural white clay. The resulting pottery, known as fritware, was snow-white, like porcelain. Potters decorated it with brightly colored glass, like the green, yellow and brown shown here.

THE HISTORY OF GLASSMAKING

Islamic merchants who traveled by sea helped ideas flow as they traded glass and other goods for decorated Chinese ceramics. In Arab and Persian households, clay pots with colorful glazes and fine white porcelain from Chinese kilns were especially prized. Over time, potters in both China and the Middle East developed new styles and techniques in response to the overseas trade.

Changsha-ware had a profound impact on the ceramic industries of the Islamic cities that readily imported these Chinese goods. But ships did not always reach their targets. In the 800s, an Arab vessel loaded with Changsha-ware was wrecked near present-day Indonesia. Excavated in the 1990s, the ship preserved its substantial cargo and was the model for the cargo hold recreated in this exhibition.

Bloodlines merged; cultural practices and foods were integrated, all blended to form the Great Silk Road.

This Persian painting from the 1400s shows a Chinese bride traveling west to be married in Islamic lands, with finely decorated porcelain pots in her dowry. The Islamic vogue for Chinese ceramics dates back at least to the late 700s, when a Persian governor sent a gift of 20 pieces of Chinese porcelain to the court of the caliph Harun al-Rashid.

Around 1,200 years ago, an Arab traveler watched in awe as Chinese potters made “goblets as thin as flasks, through which the sparkle of the water can be seen.” These delicate wares were porcelain, a refined form of ceramics perfected during the Tang dynasty (AD 618-907). For many centuries, potters in the Middle East strove to match the translucent beauty of Chinese porcelain. The secret lay in a fine white clay called kaolin, which was not available in Islamic lands. Islamic artists made other stunning discoveries, including the vivid glass displayed here.

FACTS: ALONG ANOTHER SILK ROAD, from China to Korea to the Japanese Islands

Related Topics:evidencehistoryislamIsraelMiddle East
Up Next

“glassmaking originated with the Jewish people”

What?? No it didn’t! This is just rubbish. Glassmaking in Mesopotamia and Egypt predates Judaism by at least a thousand years.

Mesopotamia, sure – though that means Abraham, so it’s their ancestors, anyway. But Egypt?

This additional history lesson might prove useful to you. Or it might not. That is entirely up to you.

Um no. Mesopotamia is Akkad, Sumer and Babylon.

Erm yes. It says glassmaking began in Mesopotamia, at a date that predates Judaism by well over a thousand years. I’m sure you can see why it’s not exactly going to change my mind about anything.

You seemed to be suggesting that glassmaking did not begin with Abraham or any of his descendants. Whether the term “Jew” refers exclusively to the Kingdom of Judah from King Rehoboam onwards, or to the House of Israel and its precursor Houses of Isaac and Abraham, is a quibble.

“You seemed to be suggesting that glassmaking did not begin with Abraham or any of his descendants.”

Abraham is a fictional character. This is a discussion about archaeology.

No wonder you missed the answer.