This morning, WND reports on another sick-making homeschool case from Germany. Two parents, trying to homeschool their children, could go to prison for four years. The judge in the case invokes a 1938-era law, still on the books, that bans homeschool activities. Sadly, American diplomats are not likely to sympathize. Conservatives should make this an election issue. If they do not, the next administration might write a German-style anti-homeschool law, or instead an executive order.

Two years ago, a family court judge in Darmstadt ordered the government to take custody of the children of Dirk and Petra Wunderlich. The authorities sent the German version of a Special Weapons Assault Team. They came in force, with a battering ram. The Wunderlichs appealed. Recently an appellate court said the circumstances did not call for as much force as that. But on the fundamental question of whether the government has the authority to punish homeschoolers, the court says, “Ja.” (pronounced Yah.)

Bob Unruh quotes the judge in the case: “The law is the law.” Unruh does not comment on what discretion a family court judge or other trial judge has in Germany. In the United States, trial judges dismiss cases all the time by finding the laws involved unconstitutional. Not so with Judge Koenig of the Family Court of Darmstadt.

Unruh also has the history of the German anti-homeschool law. In 1937, Adolf Hitler, as Führer or Leader of the Third Reich, said:

The youth of today is ever the people of tomorrow. For this reason we have set before ourselves the task of inoculating our youth with the spirit of this community of the people at a very early age, at an age when human beings are still unperverted and therefore unspoiled. This Reich stands, and it is building itself up for the future, upon its youth. And this new Reich will give its youth to no one, but will itself take youth and give to youth its own education and its own upbringing.

In other words: children belong to the state, not the family. See how the ever-brazen Hitler spoke of “giving the youth [of the Reich]” to the parents, instead of “[taking] youth and [giving] youth its own education and upbringing.” Upbringing, yet. By that logic, the government should not stop with forbidding parents to homeschool. It should instead forbid parents to parent. But Hitler never got his Reichstag to pass a law creating government crèches for all children. Doubtless he planned to get to that detail after he conquered all of Europe. But Sir Winston Churchill, President Franklin D. Roosevelt, and Generals Dwight D. Eisenhower, Omar N. Bradley, George S. Patton, Jr., and Bernard, Viscount Montgomery of Alamein had other ideas. Hitler ended up shooting himself in a sub-sub-sub-sub-basement of the Chancellery.

But his law stays on the books. As we remember V-E Day, we should also remember what probably was General Patton’s worst oversight, far worse than not removing Nazi officials fast enough for Ike’s taste. Ike should have worried about Nazi-era laws, not staff.

Leave it to the professionals?

A certain registered user, a British expat living in Germany, offers the most comprehensive defense of keeping that law on the books CNAV has found anywhere. Under the law, Herr and Frau Wunderlich could still homeschool, if they had the training to be teachers, and a government certificate to prove it. The issue, if so, is not government indoctrination but professionalism. The reasoning: education trains a child to take on adult responsibilities. None but a trained professional can so train a child. A parent who offers, or settles for, anything less, neglects his children by so doing. 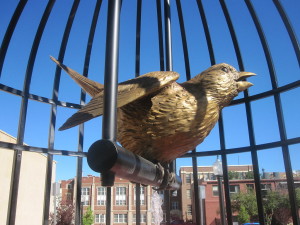 In any case, the government has no proper mission to set working standards for any profession. A government exists to manage force in retaliation against those who initiate its use. Government should have police, the military, and courts of law, and nothing else. Government especially should not set teachers’ standard or curriculum. CNAV would sooner accept a few children having less-than-optimal social or other working skills, because their parents made a few bad choices, than a government that tells all children what to believe, and what not to believe, about history, philosophy, or anything else.

Adolf Hitler had a plan: to make a set of good little Nazis. The combined armies of the world almost could not overcome that plan. (By one account, Adolf Hitler had the greatest army since Alexander the Great.) His mind-set survives, in the form of his anti-homeschool law. As long as that law stays on the books, another Hitler may arise. (John the Apostle/Revelator in fact said he will.)

The story of the Wunderlichs should serve to warn American parents. “Leave it to the professionals” sounds sweet and wonderful. Sweet enough, maybe, to pass similar anti-homeschool laws in every State in the Union. If de facto President Obama, or a Second President Clinton after him, does not sign an Executive Order forbidding American parents to homeschool.

Dirk and Petra Wunderlich have become the latest canaries in the mine. If they go, American parents may follow. Sadly, they can expect no help from American diplomats. Not from the Department of State Hillary Clinton left, and not while John F. Kerry serves as Secretary of State. And definitely not while a Democrat holds office as President.

I take the view that children are individuals, and it’s a violation of their rights for parents to deny them the skills they need to get a good job and make the most of their potential. Germany is a country with very strong social bonds. People do things as a community, as you’d see if you’d been here when the snow falls. Homeschooling is a deliberate withdrawal from the community and puts children at a huge disadvantage. So does not being educated to the standard employers demand. Yes, those who can’t find a job are supported by an (excessive) welfare system, but I’m sure you don’t find that any more desirable than I do.

You evidently did not read my article carefully enough.

Especially today, when “community spirit” in Germany seems to be all about denying faith.