March 14 marked the close of the 16th White Privilege Conference.  That’s right – this year’s event was the sixteenth iteration of this Progressive attempt to brainwash our kids against conservative values. 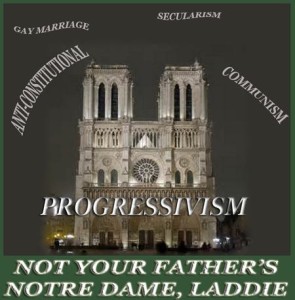 This latest version exemplifies academia’s propensity for bashing whites, conservatives and biblical truth. I find it interesting that universities are providing courses to prep handpicked students who then attend the conference. Notre Dame (yes that Notre Dame) offered, White Privilege Seminar: An Introduction to the Intersections of Privilege in Preparation for the White Privilege Conference.  Interesting because Notre Dame is a Catholic institution and the conference is intent on indoctrinating attendees against conservative Christian values.  As a Catholic this deeply disturbs me.

The conference link, (not shown by TPATH or CNAV), shows an extensive list of speakers. The last person on that list, Leonard Zeskind, made news for his opening day remarks:
Mr. Zeskind spoke on the topic he proclaims himself to be expert – the Tea Party. Here is some of what he said, as reported in The Daily Caller:

Members of the tea party movement are “screw-loosers” who range from “sort of a generic racism” to “bald-faced racists,” and they tend to become more racist the longer they associate with tea party ideas. Also, “tea partiers are not overly concerned about the economy,” love “gun rallies,” want power in the hands of white people and hate President Barack Obama because he “broke the white monopoly on the presidency.”

Although not mentioned, Mr. Zeskind is a self-proclaimed Marxist-Leninist – thus his hatred of the TP.

The following three speakers were prominently listed on the WPC 16 website. After reading their bios I couldn’t help ask, “What the hell are you thinking Notre Dame?”

Collective liberation comes from the Catalyst Project described on their website as a center where activists come together to develop theory, vision and strategy to build movements. Catalyst is a project of the Tides Center, a progressive think tank dedicated to anti-capitalist propaganda (search their video, The Story of Stuff.)

Those who understand the progressive, anti-American movement know the Tides Center is embraced by Van Jones, an avowed militant Maoist communist.

How scary is it that so-called Christian universities such as Notre Dame actually brainwash students before sending them into this anti-Christian propaganda event? It’s time alumni know what their donations are funding and make a statement by starving the beast. Strike a blow for truth and shut off the money spigot.

Related Topics:economyeducationTea Party
Up Next

Homeschool and go to prison?

3 Really Bad Signs For America | Serve Him in the Waiting