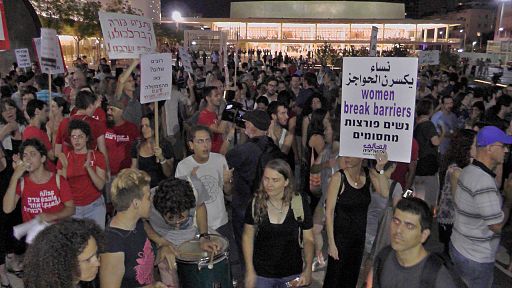 The facts speak for themselves about “Palestinians” and their breaches of the peace. The moral relativism of academics and their pernicious influence on Israeli policy makers and decision makers do not change those facts.

“Peace” with an implacable and evil foe

Given the lack of moral conviction and the psychological emasculation produced by moral relativism, how can Israel wage war against her sworn enemies, and do so with passionate conviction, when Israeli leaders are loath to use pejorative language to describe Arab-Islamic foes? Instead, they talk peace, peace, peace. 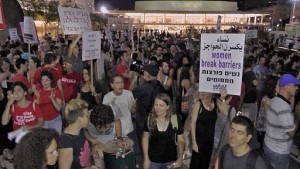 But how is peace possible with an enemy that uses its own children as human bombs? That an Israeli Prime Minister consorts with such barbarians degrades himself as well as Israel among any civilized nation. It’s nothing more than a shameful and deadly charade. And no one in this fallen democratic age bothers to call the king naked.

By now it should be obvious that Israel’s Government will continue to send Jews to fight and die in one indecisive war after another against Islamo-Nazis. How can it be otherwise when the goal of these wars will never be victory?

Victory would leave the enemy disarmed, demoralized, and incapable of waging another war against Israel. But where is the incentive to undertake such a goal when the enemy, far from being called evil, is portrayed at Harvard or at Oxford or at the Sorbonne or at the Hebrew University in Jerusalem or by the Vatican as Israel’s moral equivalent? Just pontificate about peace, peace, peace, and make sure you have a burial plot to conceal your remains.

Given the pious hypocrisy and moral cowardice of this most violent of ages, can anyone imagine America’s present Commander-in-Chief – multicultural moral relativist – pursuing a war on behalf of the people who that idiotically elected him President of the United States, when “peace,” “peace,” “peace” is the mantra of the nation’s policy makers – this, despite an enemy whose scriptures and history exalt war, war, war?

Do you think electing new politicians will undo the moral relativism and cowardly peace mania that college professors din into the minds of their students?

Do you know that the United States, the most powerful nation in the world, was defeated by a primitive tenth-rate nation in Vietnam, while the adage of “one man’s terrorist is another man’s freedom fighter” was being dinned into the minds of college youth? I mean youth whose educators erased the word “evil” from their vocabulary, hence from the vocabulary of American opinion makers and decision makers?

Do you think this decadence can be overcome without undoing the cynicism or moral relativism that permeates virtually every level of education in your country, especially the social sciences and humanities, in which your son may devote years of study to earn his college degree, which will certify him as having been intellectually stultified and morally castrated?

Do you know of any statesman that has the courage and wisdom to say that higher education is the greatest enemy of your country, and that the United States is losing its inept war against Islam, just as it lost its inept war in Vietnam, not on the battle field but on the campus?☼

After stealing the 1960 election from Richard Nixon using voter fraud, Democrat John F. Kennedy failed at the Bay of the Pigs mission to subtract Cuba from the Soviet bloc by pulling out air cover at the last minute. As a result, following a meeting with Nikita Khrushchev, in a conversation with columnist James Reston, explaining that during the meeting he, Kennedy, was seen as weak, Kennedy said, “Now we have a problem in trying to make our power credible, and Vietnam looks like the place.” When he stepped up U.S. involvement in Vietnam to make up for it, he did not do a good job at that either. Kennedy accused Ngo Dinh Diem, the most efficient president of South Vietnam, of being an oppressive dictator and allowed him to be overthrown in a coup one month before his assassination, paving the way for the communist takeover of South Vietnam, Laos, and Cambodia. When Lyndon B. Johnson succeeded him, Johnson crushed his Republican opponent Barry Goldwater in the 1964 landslide election by smearing him as a maniac who would start a nuclear war. After that, Goldwater advised him to either stay out of the Vietnam War, or win it. Johnson ignored his advice and decided to use the Vietnam War to export the welfare state instead of making victory the goal. It took Republican Richard Nixon to withdraw the United States. Although United States congress lost the Vietnam War, the American military won it. The United States military lost more than 58,000 men in the Vietnam War; the North Vietnamese military lost more than 1.1 million. Who would you guess was the victor? As a matter of fact, the US military never had significant battle losses. North Vietnam took over South Vietnam with tank battalions, the same way Nazi Germany took over Poland and France. More than a thousand civilians have been killed by the US armed forces; in fact, pains have been taken to avoid civilian casualties. Any soldier who intentionally killed a civilian was prosecuted. Black and white soldiers suffered causalities within their proportions. “We had to destroy a village to save it” was a fake quote attributed to an unidentified U. S. Army major by journalist Peter Arnett. Ivy League students back then were more likely than Vietnam soldiers to abuse drugs. Today, the Vietnamese are among the most pro-American people on the planet. Ho Chi Minh’s economic policies have been abandoned a few years after the Vietnamese unification. The reason South Vietnam lost the war and Laos and Cambodia fell to communism was because of the biased coverage from the American news media. Back then, there was no internet, and no conservative talk radio due to the FCC’s 1949 “fairness doctrine,” which President Ronald Reagan tore down in 1987. All three broadcast news networks that were spin-offs of Radio Corporation of America, CBS, NBC, and ABC, as well as almost all the newspapers at the time, were left-of-center. Excellent books on the war include The Politically Incorrect Guide to the Vietnam War by Phillip Jennings, No More Vietnams by Richard Nixon, and A Soldier Reports by William Westmoreland. John Kerry, who ran against George W. Bush in 2004 and lost but later became Barack Obama’s secretary of state, betrayed the American cause in the Vietnam War, which you can read about in the number one New York Times bestseller Unfit for Command by John O’Neil and Jerome Corsi, or watch in the documentary Stolen Honor.

To everyone reading the above: I was, as they say, “just a kid” at the time. (My birthdate: 24 November 1957.) But I remember how it was. I remember the Fairness Doctrine, and TV station editorials, and Night at the Improv “Editorial Replies.” And I remember how Walter Cronkite characterized the outcome of the Tet Offensive. A characterization I learned later was a lie. One of several lies big newspaper editors-in-chief and TV network “managing editors” could tell in those days, knowing as they did no one could – not dared, could – challenge them.