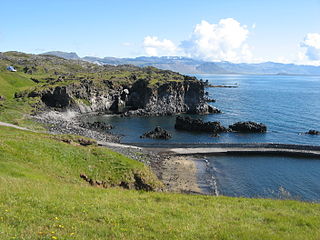 An open letter to the Honorable People of Iceland:

To the good people of Iceland, I offer our sincere appreciation for choosing righteousness over hate and the growing Islamic totalitarianism, and for voting against the Palestinian proposal to boycott Israel.  I confirmed the low-key news announcement with a call to your Washington Embassy on the morning of September 30.

Iceland! Give them a city and they will take your country

However, to my letter of concern to the Icelandic Ministry of Foreign Affairs, I had received a reply assuring me that “only one” city was boycotting Israel.  Following the logic device of where the slippery slope would lead, I feared that it would not be long before there might be “simply two.” In my lifetime, I have seen many “only ones” that have led to mass destruction, inconceivable carnage, and unimaginable misery. It continues to this day, in the Middle East, Africa, parts of Europe, and the current perpetrators are always Muslims who commit unspeakable crimes to spread Sharia to the world.

We understand that Iceland is anticipating in constructing her first formal mosque, supported by foreign funds, just as we in America welcomed our first formal mosque one hundred years   We now have upwards of 2,100 mosques, 80% of which were funded by Saudi funds. These edifices serve primarily not as prayer rooms, but as jihadi recruitment and training centers, and Reyjkovic’s prime location for their “Ground Zero” roots will further embolden your aggressors.

In the words of an Islamic poet, quoted by Turkey’s PM Erdogan, “The minarets are our bayonets, the domes our helmets, the mosques our barracks and the faithful our army.”  In addition, Col. Muammar al-Gaddafi proclaimed, in 2006, “We have 50 million Muslims in Europe. There are signs that Allah will grant Islam victory in Europe – without swords, without guns, without conquest – will turn it into a Muslim continent within a few decades.”

How will Iceland respond to the next demand for boycott of Israel or some other targeted country, when the Muslim voices, population, and mosques are increased?  Germans and Swedes are already subjected to violence and rape and commanded to relinquish their homes to the illegal, violent “asylum seekers” (jihadists).  Assuredly, Icelanders are no less vulnerable than the Nordic countries, mainland Europe, or Israel, when they will be forced to relinquish their inalienable rights, homes, and property. .  This is the time to teach your children and inform and prepare the adults about democratic Israel and her battles with the scourges of fascism and Islamism, and reaffirm your own history and future. Your citizens should learn that Israel is a leader in innovations, science, technology, agricultural and medical advancements, and cultural progress; a First Responder to world emergencies.  The essence of Judaism is Torah, Life and good deeds.

Islam, by contrast, is guided by their Qur’an, containing the world’s most brutal laws, total and unqualified submission to the will of Allah, under penalties of whipping, stoning, limb amputations, and decapitations.  It is a supersessionist ideology that encroaches upon its host country in small increments and sets down roots to ultimately overcome and supplant the indigenous population.

The real history of Israel

Minister Sveinsson, Israel became a state in 1312 BCE, two thousand years before Islam. Yet the conquest-driven Islamists continue to re-write history to promote the concept of an historically non-Jewish Jerusalem. Interestingly, the Qur’an clarifies that neither Allah nor Mohammed ever intended Jerusalem for Muslims.  From the beginning, Mohammed appropriated much of Jewish and Christian tradition for inclusion in his own religion, but never denied Jewish authority over Jerusalem.  When he fretted that Islam had no Holy City of its own, Allah, according to Islamic tradition (Surah 2:144-147), directed Muhammad toward Mecca. But because hard facts are meaningless to Islamists, there is no doubt that Iceland’s own history will also be rewritten unless you act now.

In modern times, the Balfour Declaration declared the legitimacy of Syria, Lebanon, Iraq, and a Jewish state in Palestine. As defined before the creation of Transjordan, they all derive from the same binding San Remo Resolution that was approved unanimously and signed by the League of Nations on April 25, 1920, and has never been abrogated. The Resolution recognized the exclusive national Jewish rights to the Land of Israel under international law, on the strength of the historical connection of the Jewish people to the territory previously known as Palestine.  Above all, the San Remo Conference gave Title to the land to the Jewish people. With the exception of a mere 19 years, when Jordan ruled Eastern Jerusalem, following its war of aggression in 1948, Jerusalem had been a united city for millennia. When Israel recaptured it in 1967, this ancient unity was re-established.

It was only then, in 1967, twenty years after the birth of modern Israel, that Arab refugees in Israel began identifying themselves as the Palestinian people. Not capable of militarily conquering Israel, they developed a new war strategy – convincing the rest of the world of their narrative of original inhabitance, and victimization and expulsion by the Jews. In fact, they were never expelled; some chose Israeli citizenship, while others fled the war begun by their co-religionists, their number being less than the number of Jews who, during the same passage of time, were compelled to flee the dangers of residing in Muslim countries.  Your people should be taught that Jerusalem has never been the capital of any Arab or Muslim land. Significantly, the city is mentioned more than 700 times in the Jewish Holy Scriptures, but not once in the Qur’an.

Sir Winston Churchill wrote in The River War: An Account of the Reconquest of Sudan,

How dreadful are the curses which Mohammedanism lays on its votaries! Besides the fanatical frenzy, which is as dangerous in a man as hydrophobia in a dog, there is this fearful fatalistic apathy. Improvident habits, slovenly systems of agriculture, sluggish methods of commerce, and insecurity of property exist wherever the followers of the Prophet rule or live. A degraded sensualism deprives this life of its grace and refinement; the next of its dignity and sanctity. The fact that in Mohammedan law every woman must belong to some man as his absolute property – either as a child, a wife, or a concubine – must delay the final extinction of slavery until the faith of Islam has ceased to be a great power among men . . . No stronger retrograde force exists in the world.

Before the next boycott is attempted and you lose your freedoms and land to a foreign entity, I urge you to step to the fore and invest yourselves in saving both Israel and Iceland from the horrors of Islamic conquest.  It is time to enact laws that protect your people (the children! the women!), your land and your constitution from foreign influence and safeguard your principles from compromise.   As Iceland may slowly descend from the high ground of a constitutional republic into a morass of lawlessness followed by totalitarian sharia, the window of opportunity to do so is closing by the day.

If only people would stop and learn the history….