In Demophrenia: Israel and the Malaise of Democracy, published in 1994, I first described the democratic syndrome that afflicts Israel.

Political scientists in the West offer solutions to the Arab-Israeli conflict as if Muslims were animated by the same mentality or basic desires as any American professor. Of course, Western pundits are aware of the phenomenon of Islamic hatred of non-believers. But then they trivialize this hatred and unwittingly insult Muslims by speaking of “confidence-building” measures.

The same political scientists, who define politics as a struggle for power, and who recognize Islam as a militant creed, nonetheless offer their expertise on behalf of “conflict resolution,” i.e., peace. But [given their definition of politics as a struggle for power], one would think that these political scientists would instruct politicians that the choice for any nation is not between peace and war but between war with victory and war with defeat. The paramount issue would then be the intelligent use of force …

The democratic syndrome in action 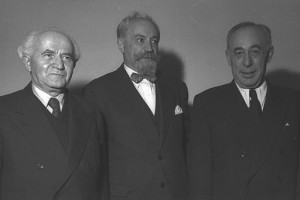 This said, I proceeded to examine some of the deepest reasons why Israel’s Government failed to quell the [first] intifada and is rather permissive toward terrorist attacks by the Abbas-led Palestinian Authority.

I pointed out that, “Unlike Muslims, democrats have a Whiggish attitude toward power: they loathe to rule. Consistent therewith, Israel’s government … offered the Arabs of Judea, Samaria, and Gaza self-rule or autonomy… A Likud-led Government was reluctant to use force to quell the Arab insurrection in these areas. Such self-constraint may be explained by a tendency most prominent in PM Netanyahu because of his excessive sensitivity to America public opinion.

This tendency may first be related to the idea that democracy is based on consent, not on coercion, on the primacy of speech, not on force (and Netanyahu is first and foremost a talker). Democrats naturally believe that conflicts may be resolved if only the parties involved are open to reason and animated by good will. This is why such notions as “conflict resolution” and “confidence building” are peculiar to democracy [but utterly foreign to Islam].

There is yet a deeper reason underlying Israel’s reluctance to use force to quell Arab violence. Operative among those who have ruled Israel since 1948,

is a most profound fear: the fear engendered by the refutation of one’s self-identity as a secular Jewish humanist. Such a humanist must believe that Jews and Arabs can live together in peace and equality in the Land of Israel, otherwise, somewhere in his psyche, he must despair of the minimalist Zionist vision of Israel as a haven for Jews against anti-Semitism.

Now, returning to the democratic syndrome which enfeebles Israel, I pointed out that,

Between 1936 and 1939 some 500 Jews had fallen victim to Arab terrorism. Yet there were virtually no acts of retaliation by the Haganah, the Jewish self-defense organization led by David Ben-Gurion. This self-immolation was rationalized as a policy of “self-restraint” (Havlaga), as the moral and humanistic response of Jews to Arab hatred and violence. Few Arabs were killed during those three years in which 500 Jews were sacrificed on the altar of socialist humanism.

Notice that no less than the supposedly tough-minded if not ruthless Ben-Gurion employed this policy of “self-restraint” vis-a-vis Arabs. And he did so without fear of CNN (which did not exist in the 1930s).

This democratic syndrome of “self-restraint” infects Israel’s present-day military establishment. Its general staff is taught that Israel, being a small state, can only react to events and not initiate them. Hence Jewish soldiers must be shot at before they return fire! And Israel’s military reaction must not be of such an extent as to remove the threat of further danger to Jewish life.

It was this pernicious attitude, and not only fear of world opinion, that rendered Israel’s Government so hesitant to initiate a preemptive strike in the Six Day War. And now, with the media’s emasculation of Israel, the Government of Netanyahu is almost paralyzed vis-à-vis Arab violence even in Jerusalem. This paralysis, however, is rooted in the democratic syndrome discussed at length in Demophrenia: Israel and the Malaise of Democracy.☼

this is why prison reform hasn’t work either. too much coddling and not enough real correction. instead, we make criminals out of decent citizens and jail them now.