On December 22, 1939, the French newspaper l’Epoque reported that Germany’s agents of influence in France were engaged in a plot to convince Marshall Petain to endorse a Government of National Unity including notorious French defeatists.

That endorsement may be compared to Prime Minister Benjamin Netanyahu’s endorsement of a Palestinian state next to a Jewish state in the Land of Israel.

Let’s elaborate on the parallel, however fanciful. 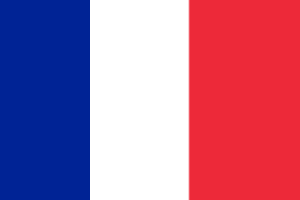 French Naval Tricolor Ensign. The red stripe is broader in proportion in this flag than in the civil flag. Graphic by User David Newton on Wikimedia Commons.

On the eve of the French Government’s enforced evacuation from Paris, and just before its conquest by the Germans on June 14, 1940, Mandel leveled a blistering indictment against France’s political and military leadership as well as its intelligence services: “Worst of all, you didn’t understand the one phenomenon you had to understand in order to save your country. You didn’t understand Hitler. You didn’t understand that he was planning total war. You never stopped to consider that total war is – total. That it really includes everything. You didn’t see what was coming closer and closer. And we who did see were called hysterical.”

Differences aside, the overlap with Israel and the Palestinians is striking. Recall that in September 1993, Israel’s Government, led by Yitzhak Rabin and Shimon Peres, opened the Land of Israel to Hitler’s successor, Yasser Arafat via the Oslo or Israel-PLO Agreement. Recall, too, that Israel’s military and intelligence officials marched in lock-step with Israel’s political leaders – “useful idiots,” to use Lenin’s apt phrase.

However, no intelligence services were necessary in Israel to see that Arafat was committed to Israel’s total destruction. He made this palpably clear, again and again. The same may be said of Arafat’s successor, Mahmoud Abbas, the president of the PLO-Palestinian Authority. It thus appears that the 1939 season of “useful idiots” which betrayed Czechoslovakia is well represented in Israel, not only in the Left.

As is known by other than “useful idiots,” Czechoslovakia was the victim of Chamberlain’s policy of “territory for peace.” This defines the defeatist policy initiated by the Rabin-Peres Government of 1993. The same policy remains the centerpiece of the Netanyahu Government despite the 15,000 Jewish casualties resulting from that policy. What drives Netanyahu? Surely he’s not a “useful” idiot. Surely he doesn’t lack conviction in the justice of Israel’s cause, even though the Oslo policy of “territory for peace” serves as Bibi’s firmest religion.

Conversely, since the only rational alternative to his appeasement of the despotic Palestinian Authority is its suppression, does Bibi’s fear that the suppression of the PA would arouse the hostility of world opinion in general, and of American public opinion in particular?

But isn’t the United States cognizant of the genocidal objectives of the PA, as stated in its Charter? Hasn’t Netanyahu made this crystal clear to the Americans and to the Europeans since he became Israel’s PM in 1995? Isn’t two decades enough for this intelligent and mellifluous orator to convince, at least the Americans, that the PA is a consortium of anti-Western terrorist groups, that it is allied with Iran and the Muslim Brotherhood, hence, that this PA-Iran alliance endangers not only Egypt and Saudi Arabia, but also Europe and America’s strategic interests in the Middle East?

Also, doesn’t Israel enjoy a friendly American Congress, one that is aware of the PA’s anti-democratic nature? Hence, what would it take to fully expose the PA’s evil character: its obscene Jew-hatred, its training Arab children to become suicide bombers, and its using women as human bombs?

That being publicized and vividly illustrated, what more is needed to order the Israel Defense Forces to eliminate the Palestinian Authority and its terrorist network within 48 hours without incurring significant flak from the capitals of the democratic world despite their “political correctness”?

A shock-and-awe decimation of the PA would save America hundreds of millions of dollars per annum in its economic aid to the PA, which fills the coffers of its leaders and enables them to purchase arms for killing Jews, a fact that should have been engraved on American minds.

What a relief this decimation of the PA would be to the people of Israel, to Jews who have suffered unceasing Muslim-Arab terror for more than 20 years, thanks in part to American aid! And by the way, the demise of the PA would not be regretted by Egypt, since the PA is the Palestinian wing of the Muslim Brotherhood.

The disarming of the PA is the only rational alternative to its appeasement by Netanyahu. The demise of the PA would not prompt Obama to terminate America’s $3 billion military aid to Israel, since that aid is linked to U.S. aviation interests, which would not look kindly on an arms embargo of the Jewish state.

Israeli prime ministers seem to be blind-deaf-mutes, like the French defeatists excoriated by George Mandel. These useful idiots behave as if they were oblivious of what was plain to any normal person, the villainy of the Palestinian leaders: yesterday Yasser Arafat, today Mahmoud Abbas.

What do Israeli leaders need to gird up enough courage to vanquish the Jewish people’s implacable enemy, the Palestinians? Are the leaders of Israel merely men without chests or boot-lickers of America? Is Netanyahu’s kowtowing to Washington comparable to Marshal Petain’s kowtowing to Berlin?

Or is Netanyahu’s endorsement of a Palestinian state – hence of a Palestine – Israel nexus – in the Land of Israel an oxymoron like Vichy-France? ◙