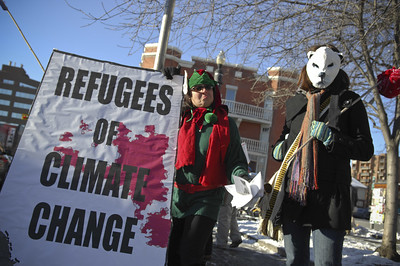 Did Climategate 4.0 just break out? Senator Kamala Harris (D-Calif.), still cowering in her office, actually grilled Judge Amy Coney Barrett about climate change yesterday. One can infer one thing only of any substance from the exchange between these two women. Which is: climate change, and the role of human industrial and other activity in provoking or aggravating it, are indeed subjects of contentious debate. Or at least one knows that Amy Coney Barrett recognizes that fact. That Senator Harris refuses to, doesn’t matter: they two disagree publicly, do they not? Therein lies your debate, if nowhere else!

So let’s have that debate! Let us, in short, bring “climate change” to court. Let Senator Harris and an alliance of like-minded environmental organizations bring a lawsuit against the rest of humanity. We can then call it Earth v. Producers, Distributors, and End Users of Energy, or Earth v. Humanity for short. In the paragraphs to follow, CNAV will give a deposition for the defense. And after reading it, you will understand why CNAV receives with hearty gladness of heart the prospect—which has become no less real for all the blubbing, weeping, and gnashing of teeth the country has witnessed for the last three days—that Judge Barrett will become Justice Barrett of the Supreme Court of the United States of America.

Before presenting the brief, CNAV must disclaim at least two things. First: your editor is not a lawyer. Your editor’s degrees are Baccalaureus Scientium and Medicinae Doctor. They do not include degrees like Legum Baccalaureus, Legum Doctor, or Jurisprudentiae Doctor. So your editor speaks, not as an attorney (one acting for another), but as a defendant giving a deposition. I am a human being, who uses energy in some form every day. So the Kamala Harrises and the Amy Klobuchars (D-Minn.) and the Dick Durbans (D-Ill.) accuse me of cooking the planet. I therefore claim the right under the Fifth Amendment not to “be deprived of life, liberty or property without due process of law.”

Second: I do not gloat over the death of Ruth Bader Ginsburg.

Nor do I necessarily say of her, as did Shakespeare of the late Thane of Cawdor, that

Nothing in [her] life / Became [her] like the leaving it.

I find her death tragic in the extreme. In fanatically staying on just to ensure her replacement by a like-minded person, she likely hastened her death. Worse, she has this kind of mourner:

To say nothing of these kinds of mourners:

Nevertheless I did not trust Ruth Bader Ginsburg to rule without bias, nor with any consideration except her own ideas and ideals about this country, and civilization in general. Ideas and ideals which I do not share, neither do I make any bones about that. I will look with far greater comfort at the Supreme Court bench, knowing that Amy Coney Barrett will sit there in Ruth Bader Ginsburg’s place.

Especially after the “law firm” of Harris, Klobuchar, and Durbin hale me into court for cooking the planet.

Climate change – real or not?

Before anyone can even bring an action against another, one must establish standing and personal jurisdiction. For that reason, Verified Complaints, or Pleadings, always begin with who and what the plaintiff(s) and defendant(s) are. And, more to the point, where they live or have their headquarters. But personal jurisdiction has no controversy here. Harris, Klobuchar, Durbin, et al. are citizens of the United States, as am I. So the Pleadings in Earth v. Humanity would then proceed to the elements of standing.

First of these is injury in fact. So the court must ask: does the climate change, and does that change hurt anyone? The plaintiffs – or perhaps one should say the prosecution – maintains that:

CNAV has read the deposition from the residents of the Tuvalu island chain. They allege that their islands are sinking and soon they will have no homes. But even that deposition does not purport to distinguish the effects of sea-level rise from simple erosion. So that makes this allegation of injury in fact debatable.

Can one trace climate change to human activity?

But let us assume for the sake of argument that the Tuvalu residents, and those of any other island chain, can establish injury in fact. Now the court must consider: can you trace the injury to the conduct of the defendant(s)?

And here we have the toughest bone of contention. For decades, several people calling themselves climate scientists, and several politicians, diplomats, and bureaucrats, have answered, “Yes!” Anyone can read their statements in many scientific journals. Chief among them: “Northern hemispheric temperatures during the past millennium: inferences, uncertainties, and limitations.” Or, to give the Court a short name, the Hockey Stick Paper of Michael E. Mann and his team. Several others have entered the scientific literature and, I am sure, will come before the Court. Herewith a list.

Dr. Mann gives his most striking allegation laying the injury in fact at humanity’s door here:

Anthony Watts of Watts Up With That rebutted Dr. Mann two days later. To summarize, and assuage the court’s concern about Dr. Mann’s fire danger allegations: no new fires broke out from the fireworks display over Mount Rushmore. CNAV takes cognizance of wildfires in California and Oregon. But we beg leave to remind the Court that certain persons, having an ideological motive or suffering from the simple psychiatric condition of pyromania, deliberately set those fires.

The case of Earth v. Humanity concerns the ordinary use of energy and its generation from fossil fuels. It does not concern arson.

Climategate – or the climate change fraud

CNAV also begs leave to repeat here the evidence I have gathered for nearly eleven years, to show deliberate fraud by Dr. Mann, his team, and his other colleagues. Before founding this site, your editor wrote as the Essex County Conservative Examiner at the now-defunct Examiner site. The Wayback Machine has the articles I wrote beginning 19 November 2009, exposing the climate change fraud. And to be specific, the fraud here is the severity of the injury and the traceability of that injury to human conduct. With that in mind, see here, here, here, here, and here.

To highlight one particular element that ought to concern the Court:

I’ve just completed Mike’s Nature trick of adding in the real temps to each series for the last 20 years (ie from 1981 onwards) amd from 1961 for Keith’s to hide the decline.

This statement constitutes a direct admission of unsound scientific practice. One never combines values from two different sets for an independent or dependent variable. Phil Jones’ use of the word trick betrays his guilty conscience. Furthermore, it betrays his guilty knowledge that Mann et al. might have committed fraud in the Nature paper he cites.

The Court can then read the articles by me and my contributors about how the climate change debate, if one may call it that, on this site:

What shall the Court do about it?

Turn now to the third element of standing: a remedy for the injury, that the law and Constitution permit the Court to order. In this case, we must infer the remedy from concrete legislative or diplomatic proposals to remedy climate change. Of which the Court can take judicial notice of several.

Christiana Figueres famously called climate change an opportunity to “overthrow the economic model that has ruled for a century and a half.” That model is capitalism.

Michael Bloomberg has his own proposal:

And then we see the Green New Deal of Representative Alexandria Ocasio-Cortez (D-N.Y.).

That proposal does away with nuclear energy (with which even James Hansen, part of the Michael Mann/Phil Jones network, disagrees). It also forbids airline travel, at least overland. And it calls for abolition of private transport and retrofitting of every building now standing.

All of which costs money. Money various governments propose to raise.

The Constitution does not authorize the Congress to “lay and collect taxes, duties, imposts [or] excises” to do any of these things. Hence this lawsuit that CNAV anticipates. Clearly those who would bring it, would hope to get a court to lay a fine on the people. They then would spend the proceeds of that fine on the programs they have outlined.

CNAV will address each point in turn about standing to sue about climate change:

CNAV can now do nothing but wait for someone to file that lawsuit. But at least Amy Coney Barrett, not Ruth Bader Ginsburg, will sit in ultimate judgment on the case.

“Climate Change Refugees” by Visible Hand is licensed under CC BY 2.0

[…] Turn now to another performance, almost as damaging, from Senator Dick Durban (D-Ill.). He betrayed his own desire: to establish precedents to deny even more rights to the people. Thus not only are certain current precedents at risk. Senator Durban himself wants to overturn a few precedents, including D. C. v. Heller. The two cases bearing that name now establish that the right to keep and bear arms is an individual right. So Senator Durban takes alarm that a team of Alito, Barrett, Gorsuch, Kavanaugh, and Thomas JJ will not let him confiscate civilian weapons. Nor will they let him order people to get out of their cars because they are cooking the planet. […]

[…] Supreme Court. At last we see a Court in which we feel safe having our day. Say, if a case of Earth v. Humanity finds its way to that […]

[…] anything if their minds are riveted on victimization, false social justice issues and the unproven climate change hoax? The emphasis on resentment emerges as violence because they lack a decent education, […]