Do you know that Israel once had a non-Jew as its Prime Minister?

Interviewer:  What happened in this election?

Interviewer:  Who is we?

Peres: We, that is the Israelis.

Interviewer: And who won?

Peres: All those who do not have an Israeli mentality.

Interviewer: And who are they?

That was back in 1996, before the Members of the Knesset elected an Israeli, Shimon Peres, as Israel’s President. Thus, Israel has not only had a non-Jew as its Prime Minister, but also the same as its President.

This is ironic, because back in 1949, when the Knesset formed a committee to adopt a Constitution for the re-born “Jewish” State, a draft constitution was rejected because it prescribed that the President of the State be a Jew!

The chickens have come home to roost

Since then Israel has had at least one Prime Minister – most recently Mr. Benjamin Netanyahu – that has endorsed the creation of a Palestinian, hence a Muslim-Arab, state in Judea and Samaria. That was on June 14, 2009. 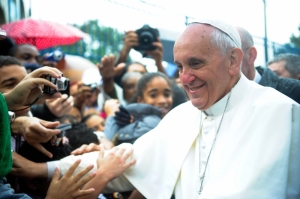 Thus, when Pope Francis recently recognized the newly declared state of Palestine, he was only affirming the wishes Mr. Netanyahu expressed in 2009 at Bar-Ilian University.  Perhaps the Pope was encouraged by the fact that neither the officials nor the faculty of that religious university issued any protest against Mr. Netanyahu’s endorsement of a Muslim-Arab in the cradle of Jewish civilization.

It thus appears that Mt. Netanyahu’s insistence on Palestinian recognition of Israel as the State of the Jewish people has no substance or is mere rhetoric.

By the way, Netanyahu’s Bar-Ilian University endorsement of a Palestinian state can only fuel those who demonize Israel and seek her demise. The Chickens Have Come Home to Roost.☼