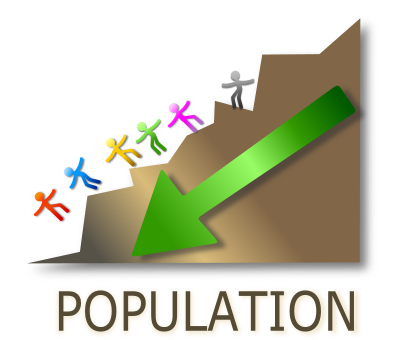 Population growth on Earth should not worry anyone. Even conventional sources now admit that world population growth has slowed and will reverse in less than a century. But since humans first started to build cities, the elite of any civilization has always fretted about population growth. Today’s world elite is doing more than fret. It is waging active war against the non-elite, with measures designed not only to slow the growth of population, but to reduce it by any means, fair – or foul.

From the UN: world population growth slowing down

CNAV does not regard the United Nations as a reliable source. They have had suspect motives ever since Alger Hiss, at the Dumbarton Conference, engineered its formation. Nevertheless, two years ago they made a key admission: population growth is slowing. The UN Department of Economic and Social Affairs, Population Division, projects that population will peak at 11 billion people by 2100.

But the UN also admits several things that undermine their own thesis that population continues to grow at all. The world’s people, they say, are growing older on average. The UN cites greater longevity and declining fertility. An aging population is a shrinking population. In fact they admit that 27 countries are losing population. Among them: the People’s Republic of China.

So why is any country adding people? Migration, pure and simple. Migration, and having a birth rate higher than average, though not necessarily at or above replacement level. Population growth has slowed there, too. The U.S. Census Bureau, shortly before the 2020 Census began, reported slowing growth in the United States.

What’s that phrase? Replacement what?

For everyone’s information: it takes 2.1 births per woman of childbearing age to replace:

So when the live birth rate per woman of childbearing age falls below 2.1, we say that fertility has declined below replacement level.

But that covers only the children who die in infancy or childhood, by disease or accident. What about the children whom we remember today only as faces on a milk carton? They vanish completely, only to turn up – if anyone recognizes them – in mass graves at pedophile game preserves. (Do not doubt that such places exist! Sometimes they exist in the disguise of charitable institutions, like this.) And what about the children who let certain activists beguile them into questioning their identity? They then fall victim to surgical mutilation and hormonal poisoning that has one consistent effect: they become sterile. Your editor will say more about that later, but for now, consider this. The replacement level of 2.1 births per woman of childbearing age might seriously understate the real replacement level.

Whatever that level is, Elon Musk, of Tesla, SpaceX, and Boring Company fame, understands that we have fallen below it. He directly challenges the very notion that population continues to grow, and pours contempt on the notion that such growth has spiraled out of control. He made these remarks to the Wall Street Journal CEO Council. Steven Turley, Ph.D., picked them up:

There are not enough people. I cannot emphasize this enough: there are not enough people. And I think one of the biggest risks to civilization is the low birth rate and the rapidly declining birthrate. Yet so many people, including smart people, think that there are too many people in the world and think that the population is growing out of control. It’s completely the opposite. Please look at the numbers. If people don’t have more children, civilization is going to crumble. Mark my words.

Dr. Steve Turley continued his video with an optimistic view: as leftists declined to have children, the rightists would have all the children. And within ten years, or a generation away at the latest, they would outvote and expel from public life the enemies of humanity and human freedom.

The elite know it, and fear a growing population

Understand this: the elite know this. But they don’t care about the hazards of a declining population. They think that they will have enough robotic servitors, humaniform and otherwise, to feed them and keep them comfortable while requiring minimal maintenance. And the rest of us? We are in their way. We have always been in their way. Elite members going all the way back to the boni or optimates in the Senate of Rome have always felt that the Earth had not enough room in it for them on the one hand and us on the other.

For that reason, the elite do care about the radically new political dynamics of human fertility today. Time was when everyone had as many children as they could afford to raise. But today you hear of people “not wanting to bring new children into the world.” Such people cite “climate change” today, but fifty years ago they cited continued warfare and pollution. Today we have solved pollution in large part. But don’t tell that to those who “don’t want to bring new children into the world.”

But this observation has a flip side. We who know that the problems the no-more-children movement cites lack sufficient foundation, gravity, or staying power to justify leaving off childbearing and child-rearing, are having most or all the children. By 2030, says Dr. Steve, enough of our children will have grown up to replace the misanthropes and pessimists. We can then outvote the still alive and remaining ones.

The elite sponsor movements for static or declining population

Do not suppose for one moment that the elites don’t know all of this. They set up the intellectual poisoning of young minds to convince people not to have children, either because:

Those of us who know better, are having children – too many for the comfort of the elite. So what are they doing about it? First, they financed movements to send activists into our schools. Their mission: to reach as many children as they could with the message that any tender feelings they might have with members of their own gender deserve actualization, not the diagnosis and treatment they actually deserve. Or even to convince children that their anatomy is all wrong and that they ought to go in for “treatment” to change gender. (And don’t tell your parents! This is our secret, heh, heh.)

At the same time, the man who thinks he is Capo de tutti capi, Chief of all Chiefs, of Staff at all hospitals, embarked on a diabolical scheme that, yes, with a nod to Lara Logan, really does rival the worst schemes that came out of the twisted mind of Herr Doktor Josef Mengele, Chief Medical Officer at Concentration Camp Auschwitz. Anthony S. Fauci weaponized one of many viruses that cause the common cold. He then gave his prototype and notes to the People’s Liberation Army Biological Warfare Corps, Virus Division. You may know them more popularly as the Wuhan Institute of Virology. Who then deployed what we know as Severe Acute Respiratory Syndrome Corona Virus No. 2 worldwide. (Didn’t Dr. Paul Ehrlich openly say he hoped for the right virus to come along?) That deployment gave the elite the excuse they needed to shut down the world’s economy.

But when they did that, they underestimated the Great Unwashed. We insisted that school go on. So government schools continued on-line, through teleconferencing software. For the first time, parents listened in. And they cried out in a loud voice, Whiskey Tango Alpha Foxtrot!!! We saw one result at meetings of the Loudoun County (Virginia) Board of Education. The outrage continued in the Virginia Pre-Wave Election of 2021.

Separately, a Great American Manufacturing Renaissance is under way. With container ships stacked in holding patterns in the waters off the Port of Los Angeles, and thieves breaking into stacked containers on shore, finally people realize: better to make the stuff here. And we already see this happening.

The elite can’t have this. That’s the real reason for the Great Vaccine Push, in the face of clear evidence that the vaccines are dangerous and countereffective. This morning a source told CNAV that

If dangerous toys are taken off the market so kids can’t get hurt, and if foods are recalled for being poisonous or sickening or something, why not these injections or similar?

But we’re not talking about dangerous toys. We are talking about the airdropping of grenades disguised as toys. The old Soviet Army deployed such “toys” in Afghanistan. The vaccines are a metaphor for such “toys” today. And we can see their countereffectiveness today. How many of you, reading this article today, know someone who, after taking the jab, still tests positive for COVID? Did you know that Tulane University recently shut down Men’s Basketball after a virus broke out in the team? With a ninety-seven-percent vaccination rate, still they had an outbreak? What does that tell you?

See also John Anthony’s showing, from the data, of the danger of the vaccine.

CNAV has one last piece of evidence. Murder is trending sharply upward in twelve American cities, not even counting the usual hotbeds of crime. The source article points to Democratic Party governance of these cities. CNAV sees more than that. The murders we see are random: someone knocking off a target of opportunity just to rob him, or killing for the sake of killing. No one is safe in these places. The elite want this – because a murderer is now an irregular human population reducer.

All this goes to show one thing. Population, including its growth or decline, has become the new theater of war between the elite and us Great Unwashed. For that reason, do not believe what the UN, or any government sympathetic to it, says. This Earth will do just fine – but in a sense different from what they mean, the elite are correct. This Earth is not big enough for them and us together. The only difference lies in who really has to go.

Related Topics:coronaviruseducationpopulationvaccinewarworld population
Up Next

[…] plan of the Marxist’s Great Reset, and the numerous ways that have been set into motion to control and eliminate large swaths of people (billions) for depopulation without casting suspicion on the “well […]

[…] have signed on to the depopulation agenda, and using the COVID vaccine to accomplish […]

[…] defy nature. (Schwab might in fact be perfectly copacetic with this, because he and his friends think the earth has too many people on it, […]

[…] population itself is a theater of war. Governor DeSantis has just secured at least at temporary victory in a skirmish in that […]

[…] America have a low birth rate? CNAV covered this before, in December of last year. Today, World Population Review has up-to-date evidence. The United […]

AOC, make up your mind! - Conservative News and Views

[…] do we? Could it be, instead, that she has signed on to the depopulation agenda of the Liberal Globalist World Order? Might she really believe that the elite will have a cushy job […]